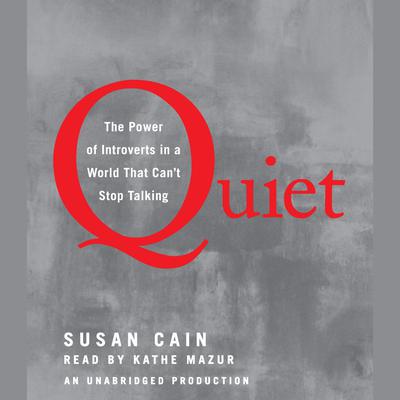 The Power of Introverts in a World That Can't Stop Talking

“This is a wonderfully important book which just may help the human race survive and thrive. In a clear and readable style, combining emerging science and sociological perspective as well as deep empathy and intelligence, Cain does a superb job of making us think. Readers will recognize behaviors at both ends of the introvert/extrovert personality spectrum as well as everything in between and will feel empowered to find their own comfort level for living.”
— Karen Frank, Northshire Bookstore, Manchester Center, VT
View the List

“Superbly researched, deeply insightful, and a fascinating read, Quiet is an indispensable resource for anyone who wants to understand the gifts of the introverted half of the population.”—Gretchen Rubin, author of The Happiness Project

NAMED ONE OF THE BEST BOOKS OF THE YEAR BY People • O: The Oprah Magazine • Christian Science Monitor • Inc. • Library Journal • Kirkus Reviews

At least one-third of the people we know are introverts. They are the ones who prefer listening to speaking; who innovate and create but dislike self-promotion; who favor working on their own over working in teams. It is to introverts—Rosa Parks, Chopin, Dr. Seuss, Steve Wozniak—that we owe many of the great contributions to society.

In Quiet, Susan Cain argues that we dramatically undervalue introverts and shows how much we lose in doing so. She charts the rise of the Extrovert Ideal throughout the twentieth century and explores how deeply it has come to permeate our culture. She also introduces us to successful introverts—from a witty, high-octane public speaker who recharges in solitude after his talks, to a record-breaking salesman who quietly taps into the power of questions. Passionately argued, impeccably researched, and filled with indelible stories of real people, Quiet has the power to permanently change how we see introverts and, equally important, how they see themselves.

SUSAN CAIN is the author of the acclaimed New York Times bestseller QUIET: The Power of Introverts in A World That Can’t Stop Talking, which is being translated into over thirty languages and was named the #1 best book of the year by Fast Company magazine.  Cain’s book was the subject of a TIME magazine cover story, and her writing has appeared in the The New York Times; The Atlantic; The Wall Street Journal; O, The Oprah Magazine; Salon.com; Time.com; PsychologyToday.com, and other publications. Cain has also spoken at Microsoft, Google, the U.S. Treasury, and West Point. Her record-smashing TED talk has been viewed over 3 million times, and was named by Bill Gates as one of his all-time favorite talks.

She has appeared on national broadcast television and radio including CBS “This Morning,” NPR’s “All Things Considered,” NPR’s “Diane Rehm,” and her work has been featured in The New Yorker, Harvard Business Review, The Atlantic, Wired, Fast Company, Real Simple, Fortune, Forbes, PEOPLE, Scientific American, USA Today, The Washington Post, CNN, Slate.com, and many other publications.  She is an honors graduate of Princeton and Harvard Law School. She lives in the Hudson River Valley with her husband and two sons. You can visit her at www.thepowerofintroverts.com., and follow her on twitter (@susancain).