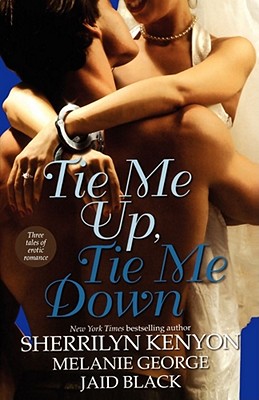 Tie Me Up, Tie Me Down

In this sexy erotica anthology, three hot authors reel you in with sizzling novellas about alpha heroes who will do anything to get the women they want -- even kidnap them!
Bestselling author Sherrilyn Kenyon presents "'Captivated' by You," the second sexy story in her series featuring the Bureau of American Defense. Rhea Stevenson is a "BAD" agent who has just been handed her most challenging assignment. She must go undercover as a dominatrix to bring in a deadly terrorist. The only upside is that her fellow agent, "Ace" Krux, whom she has long desired, is her training partner. Almost immediately the roles of master and slave are wonderfully blurred and Rhea and Ace unleash a wealth of hidden desire.
From bestselling romance author Melanie George comes "Promise Me Forever," the story of Savannah Harper, who has finally put her breakup with pro-football player Donovan Jerricho behind her. But when Tristan comes home to Mississippi on the eve of Savannah's wedding, he still wants her. And when he carries her off and holds her hostage, Savannah's surprised to find that the desire's deliciously mutual....
From Jaid Black comes "Hunter's Right," the fantastical story of Corporal Ronda Tipton of the U.S. Army, whose chopper goes down in the Arctic Circle. The only survivor of the crash, Ronda happens upon a hidden civilization of Vikings -- where she must face the bridal auction block. Only Nikolas Ericsson, the man who found Ronda, can save her by claiming her as his own according to sacred rights. But will she and this primitive brute give in to the sparks made when their worlds collide?
Sensual and playful, these three novellas will carry you away!

Before she discovered romantic fiction, Melanie George was the CEO of an executive-search consulting firm. Her most important job, however, has always been that of mother, to both a much-adored son and two precious dogs. When she is not writing, she is trying to restore her hundred-year-old house and has come to the conclusion that paint speckles will more than likely be a permanent part of her person.