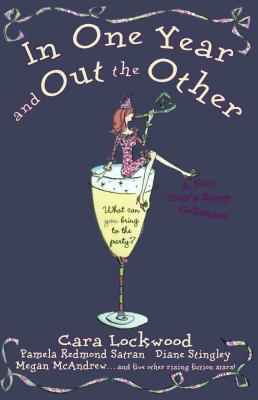 In One Year and Out the Other (Paperback)

Out with the old, in with the new, and on with the party!
Maybe it's just another midnight...or maybe there really is magic in the air when December 31st becomes January 1st, and confetti kisses and champagne toasts kick off a new year, a new romance, a new look, a new attitude.
Celebrate the start of something new with In One Year and Out the Other...a sparkling collection of all new stories by today's rising fiction stars:
Cara Lockwood puts self-improvement to the test with 528 resolutions -- not least of which is "Do not sleep with married men" -- in "Resolved: A New Year's Resolution List"...Pamela Redmond Satran instructs a single mom in the fine art of partying like the boys (have lots of sex, don't worry that you're too fat) in "How to Start the New Year Like a Guy"...Diane Stingley shows a twentysomething why there's more to life than waiting by the phone for a New Year's date in "Expecting a Call"...Megan McAndrew seizes the day -- or just a very special one-night stand -- for a single food stylist hungering for more in "The Future of Sex"...and more great tales from Kathleen O'Reilly, Beth Kendrick, Eileen Rendahl, Tracy McArdle and Libby Street.

Cara Lockwood is also the author of I Do (But I Don't), which was made into a Lifetime movie, as well as Pink Slip Party and Dixieland Sushi, and Every Demon Has His Day, all available from Downtown Press. She was born in Dallas, Texas, and earned a Bachelor's degree in English from the University of Pennsylvania. She has worked as a journalist in Austin, and is now married and living in Chicago. Her husband is not a rock star, but he does play the guitar -- poorly.

Pamela Redmond is the New York Times bestselling author of more than twenty works of fiction and nonfiction, including Younger, How Not to Act Old, and 30 Things Every Woman Should Have & Should Know. She started publishing novels, cofounded the world’s largest baby name website Nameberry, got divorced, moved from New Jersey to Los Angeles, and changed her name, all after the age of fifty. The mother of three and grandmother of one, Redmond’s website is at PamelaRedmond.com.
or support indie stores by buying on
Copyright © 2020 American Booksellers Association