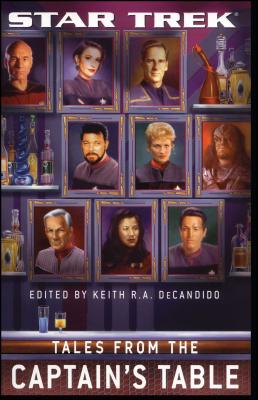 In this follow-up to the bestselling Captain's Table series of books, nine new Star Trek® captains belly up to the bar to tell their tales of adventure and romance, of triumph and tragedy, of duty and honor, of debts paid and prices exacted, including:

From the weekly episodes of Star Trek: Enterprise to the monthly adventures of S.C., from the bestselling novel Serpents Among the Ruins to the bestselling series New Frontier, from the past tales of Stargazer to the new stories of Titan, from the glorious exploits of I.K.S. Gorkon to the post-finale chronicles of Deep Space Nine and Voyager, come nine new stories from the nine newest members of Star Trek's finest and bravest shipmasters.

Keith R.A. DeCandido was born and raised in New York City to a family of librarians. He has written over two dozen novels, as well as short stories, nonfiction, eBooks, and comic books, most of them in various media universes, among them Star Trek, World of Warcraft, Starcraft, Marvel Comics, Buffy the Vampire Slayer, Serenity, Resident Evil, Gene Roddenberry’s Andromeda, Farscape, Xena, and Doctor Who. His original novel Dragon Precinct was published in 2004, and he's also edited several anthologies, among them the award-nominated Imaginings and two Star Trek anthologies. Keith is also a musician, having played percussion for the bands the Don't Quit Your Day Job Players, the Boogie Knights, and the Randy Bandits, as well as several solo acts. In what he laughingly calls his spare time, Keith follows the New York Yankees and practices kenshikai karate. He still lives in New York City with his girlfriend and two insane cats.
or support indie stores by buying on