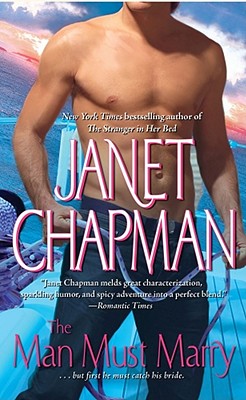 The Man Must Marry

Trying to escape marriage,
they are snared by love.

When Sam Sinclair's self-made millionaire grandfather sends Willa Kent, a woman none of the three Sinclair brothers have even heard of, as his proxy to an ultra-important meeting of the Sinclair shipping company, most people would think the old man had lost his marbles. But Sam knows his grandfather too well. For some reason, the wily old man has decided that one of his three grandsons should marry Willa, and this is his way of trying to force the issue....

So Willa and Sam team up on what seems like a wild-goose chase to find some loophole in Grandfather Sinclair's crazy notion. But as Sam crews Willa's yacht en route to Maine, he finds to his surprise that his grandfather's offbeat scheme is growing more attractive by the moment. Willa is smart, beautiful...and has a wild streak that sends them soaring together above the clouds.

But Willa isn't about to let Sam fly away with her heart until she knows his true motives. If the man wants to marry for money, then the woman in her says that first he must fall in love.

Praise For The Man Must Marry…

A native of rural central Maine, Janet Chapman (1956–2017) lived in a cozy log cabin on a lake with her husband, three cats, and a stay young bull moose. The author of the hugely popular Highlander time-travel series, she also wrote numerous contemporary romances.
Loading...
or
Not Currently Available for Direct Purchase