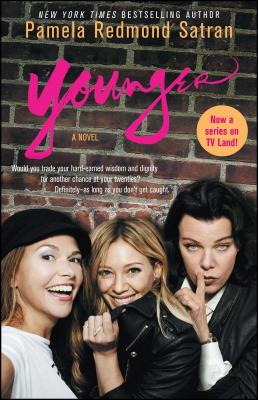 A story of inspiration and transformation for the really desperate housewife—now a TV series from the creator of Sex and the City, starring Sutton Foster and Hilary Duff!

She’s old enough to be his mother.

Alice has always looked young for her age, even with her graying hair and her dowdy New Jersey housewife style. Make that ex-housewife: Now that her husband’s gone and her daughter is grown, Alice is in desperate need of a whole new life. So she lets her best friend Maggie, a hip New York City artist, transform her on New Year’s Eve. Soon, thanks to the wonders of hair dye and tight jeans, Alice looks really young, as one night in a Manhattan bar confirms. At midnight, she kisses a boy who was in diapers when she was in high school.

She’s having too much fun to care.

The white lie Alice tells Josh gets her thinking that if no one asks her age, she doesn’t have to tell. So she applies for a job she had briefly before becoming a full-time mom—and gets it. Meanwhile, Josh is falling head over heels for Alice, who’s just way cooler than girls his age. He figures she’s about twenty-nine—and for the first time since she was twenty-nine, or possibly ever, Alice feels that life is ripe with possibility. Unfortunately one possibility is that she’s gonna get caught.

Challenging the adage that the truth will set you free, Younger is a hilarious and insightful story that proves that you’re only as young as you feel.

Pamela Redmond is the New York Times bestselling author of more than twenty works of fiction and nonfiction, including Younger, How Not to Act Old, and 30 Things Every Woman Should Have & Should Know. She started publishing novels, cofounded the world’s largest baby name website Nameberry, got divorced, moved from New Jersey to Los Angeles, and changed her name, all after the age of fifty. The mother of three and grandmother of one, Redmond’s website is at PamelaRedmond.com.
Loading...
or
Not Currently Available for Direct Purchase