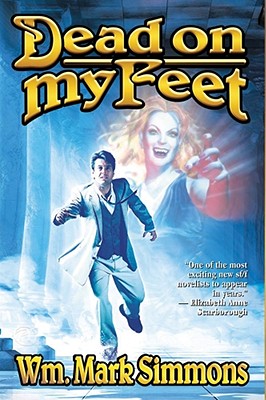 Dead on My Feet (The Halflife Chronicles)

The living dead were making his life a living hell-the hilarious sequel to One Foot in the Grave. First time in paperback.

A year ago, Chris Csejthe (pronounced "Say-thee") was completely human-then a blood transfusion with the Lord of the Undead changed everything. Now he is a hunted man, sought by human and vampire alike for the secrets he knows and the powers that his mutated blood may bestow. So far he's dodged undead assassins, werewolves, a 6,000-year-old Egyptian necromancer, and Vlad Dracula himself. But now he's really got problems. The dead are turning up on his doorstep after dark to ask for justice and the police want to know where all those corpses are coming from. Undead terrorists are testing a doomsday virus on his new hometown and he's caught in the crossfire between a white supremacist militia and the resurrected Civil War dead. His werewolf lover, jealous of his dead wife's ghost, has left him. And the centuries-old and still very beautiful (and very deadly) Countess Bathory is determined to have his uniquely transformed blood for her own dark purposes. Now, more than ever, life sucks!

William Mark Simmons is the author of five novels; his first, In The Net of Dreams, was a finalist for the Compton Crook Award and made the LOCUS "Best" list in 1991. That novel, with its two sequels, When Dreams Collide and The Woman of His Dreams, have recently been published in one hardcover volume by Meisha Merlin Publishing. For Baen he wrote the popular and critically praised One Foot in the Grave, to which Dead on My Feet is a sequel. Simmons has worked as a teacher, actor, director, musician, and entertainer, hosting his own shows on both television and radio while winning awards as a journalist and copywriter. He currently manages a public radio station in Louisiana, hosts a classical music program, and is an adjunct faculty member of the University of Louisiana at Monroe.
Loading...
or
Not Currently Available for Direct Purchase