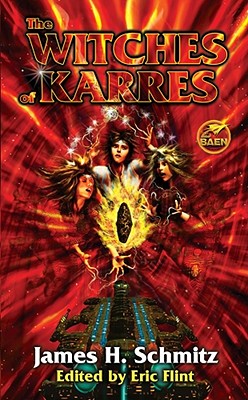 the Witches of Karres

Blazing interstellar adventure by the creator of Telzey Amberdon and Trigger Argee.

Captain Pausert thought his luck had finally turned-but he did not yet realize it was a turn for the worse. On second thought, make that a turn for the disastrous! Pausert thought he had made good with his battered starship, successfully selling off odd-ball cargoes no one else could sell. And then he made the mistake of freeing three slave children from their masters (who were suspiciously eager to part with them). No good deed goes unpunished, and those harmless-looking young ladies were just trying to be helpful, but those three adorable little girls quickly made Pausert the mortal enemy of his fiancée, his home planet, the Empire, warlike Sirians, psychopathic Uldanians, the dread pirate chieftain Laes Yango-and even the Worm World, the darkest threat to mankind in all of space. And all because those harmless-looking little girls were in fact three of the notorious and universally feared Witches of Karres. A rollicking novel from the master of space adventure.

James H. Schmitz was born in Hamburg, Germany, in 1911 of American parents. He spent the years of the First World War in the United States, then went back to Germany to complete his schooling. Aside from several trips to the United States, he lived in Germany until 1938, returning to America with the outbreak of World War II. He sold his first story, "Greenface," to the now-legendary fantasy magazine Unknown Worlds, shortly before Pearl Harbor, but by the time it was published, he was flying with an Army Air Corps group as an aerial photographer in the Southern Pacific Theater. In 1949, he began publishing his "Agent of Vega" series in the leading SF magazine, Astounding (later renamed Analog), and was one of that magazine's most popular contributors over the next three decades, introducing the memorable heroines Telzey Amberdon and Trigger Argee, leading protagonists in his massive "Federation of the Hub" series. He died in 1981.
Loading...
or support indie stores by buying on
(This book is on backorder)