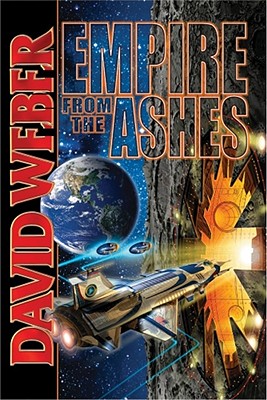 Empire from the Ashes

For Colin MacIntyre, it began with a routine training flight over the moon. For Dahak, a self-aware Imperial battleship, it began millennia ago, standing guard against an unknown enemy which once devastated the galaxy-and now has returned. So Dahak grabbed MacIntyre's ship and informed him that he was drafted to be its new captain and lead the fight against the ancient enemy.
MacIntyre had doubts that he could handle the job, but Dahak had definitely picked the right man. Before it was all over, MacIntyre would:
Defeat a cadre of mutineers, formerly part of Dahak's crew, kept alive through untold generations by alien technology, who have been secretly manipulating life on earth for thousands of years . . .
Mobilize the planet into a fighting force that might have a slender chance of stopping the ancient alien menace from eradicating all intelligent life in its path . . .
And resurrect the ancient galactic empire, which had fallen into chaos and barbarism, with himself as Emperor-which meant that he immediately became the target of a plot to assassinate him, and strand his son and daughter on a planet where their chances of surviving in a superstitious pre-tech society would be zero for the average human . . .
Fortunately for the galaxy, Colin MacIntyre and his heirs have never even heard of average, and anyone, human or alien, who got in their way was going to be very, very sorry.