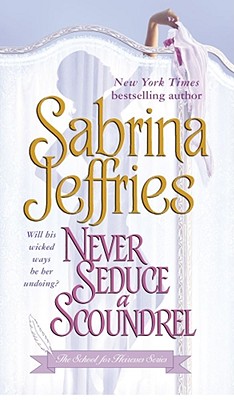 Never Seduce a Scoundrel (The School for Heiresses #1) (Mass Market)

From the New York Times bestselling author of the sizzling Sinful Suitors series, this first book in the sexy, sparkling School for Heiresses series follows unconventional heiresses who are so much more than just matches for society’s most irresistible rogues.

Lady Amelia Plume has many admirers—it’s too bad they’re all fortune hunters and fops who can’t provide the exotic adventures she seeks. But the ballrooms of Mayfair have become much more appealing since the arrival of Major Lucas Winter, an American with a dark past and a dangerous air. Lucas is brash, arrogant—and scandalously tempting. Every thrilling kiss sparks hotter desire, yet Amelia suspects that Lucas has a hidden motive in wooing her. And she intends to discover it, by any means necessary.

Sabrina Jeffries is the New York Times and USA TODAY bestselling author of several Regency-set historical romance series, including the Royal Brotherhood, the School for Heiresses, the Hellions of Halstead Hall, the Duke’s Men, and the Sinful Suitors. When she’s not writing in a coffee-fueled haze, she’s traveling with her husband, caring for her adult autistic son, or indulging in one of her passions: jigsaw puzzles, chocolate, music, and costume parties. With more than nine million books in print in twenty languages, the North Carolina author never regrets tossing aside a budding career in academics for the sheer joy of writing fun fiction and hopes that one day a book of hers will end up saving the world. She always dreams big.

Praise For Never Seduce a Scoundrel (The School for Heiresses #1)…

"Jeffries not only beguiles readers with scenes of passion and vivid characters but steadily builds the story's tension to an exciting conclusion."

-- Publisher's Weekly on One Night With a Prince