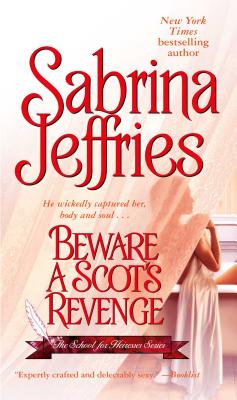 Beware a Scot's Revenge (The School for Heiresses #3)

Lady Venetia Campbell's visit to her childhood home in Scotland takes a dramatic turn when she's kidnapped at pistol point by her father's sworn enemy. Sir Lachlan Ross is widely feared in his guise as The Scottish Scourge, but Venetia remembers her former neighbor as a handsome youth whose attentions she craved. Now a wickedly sexy man, Lachlan's appeal is even more intoxicating...and much more dangerous. Though Lachlan tries to treat her as his foe, his scorching kisses tell another story. And despite his plan to use her as a weapon against her father, Venetia is determined that Lachlan's lust for revenge will be trumped by an even more powerful desire....

Praise For Beware a Scot's Revenge (The School for Heiresses #3)…