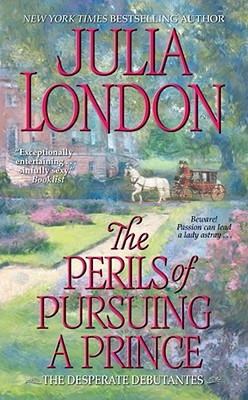 The Perils of Pursuing a Prince (Desperate Debutantes) (Mass Market)

From New York Times bestselling author Julia London comes the second novel in her irresistibly romantic Desperate Debutantes trilogy, in which three suddenly destitute aristocratic young ladies must resort to desperate means to keep up appearances...and find the husbands of their dreams.

Lady Greer Fairchild's only hope of avoiding marriage to the first bidder lies in journeying into the untamed Welsh countryside in search of an inheritance she's not sure even exists -- one reportedly controlled by Rhodrick Glendower, Earl of Radnor, also known as the Prince of Powys. Rumor has it that the prince is rough, ruthless -- even a murderer. But Greer never imagined that the brute would refuse to let her leave his remote castle until she has proven her identity. Or that she would find herself powerfully attracted to this passionately virile man whose gruff demeanor belies a proud and sensual nature. The further Greer falls under his spell, the more determined she becomes to unravel the secrets of her Welsh heritage and the mystery surrounding the dark prince who dares her to become his wife and princess.

Julia London is a New York Times and USA TODAY bestselling author of more than forty romantic fiction novels. She is the author of the critically acclaimed Highland Grooms historical series, including Wild Wicked Scot, Sinful Scottish Laird, Hard-Hearted Highlander, Devil in Tartan, Tempting the Laird, and Seduced by a Scot. She is also the author of several contemporary romances, such as the Homecoming Ranch series and the Lake Haven series, including Suddenly Dating, Suddenly in Love, and Suddenly Engaged. Julia is the recipient of the RT Book Reviews Award for Best Historical Romance and a six-time finalist for the prestigious RITA award for excellence in romantic fiction. She lives in Austin, Texas.

Praise For The Perils of Pursuing a Prince (Desperate Debutantes)…

"London's characters come alive on every page and will steal your heart." -- Atlanta Journal-Constitution
or
Not Currently Available for Direct Purchase
Copyright © 2020 American Booksellers Association