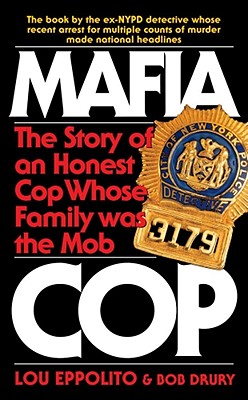 He was one of the most decorated cops in the history of NYPD. From his "wiseguy" relatives, he learned the meaning of honor and loyalty. From his fellow cops, he learned the meaning of betrayal.
MAFIA COP
His father, Ralph "Fat the Gangster" Eppolito, was stone-cold Mafia hit-man. Lou Eppolito, however, chose to live by different code; he chose the uniform of NYPD. And he was one of the best -- a good, tough, honest cop down the line. Butu even his sterling record, his headline-making heroism, couldn't protect him when the police brass decided to take him down. Although completely exonerated of charges that he had passed secrets to the mob, Lou didn't stand a chance. They had taken something from him they couldn't give back: his dignity and his pride.
Now, here's the powerful story, told in Lou Eppolito's own words, of the bloody Mafia hit that claimed his uncle and cousin...of his middle-of-the-night meeting with "Boss of Bosses" Paul Castellano...of one good cop who survived eight shootouts and saved hundreds of victims, who was persecuted, prosecuted, and ultimately betrayed by his own department. Full of hard drama and gritty truth, Mafia Cop gives a vivid, inside look at life in the Family, on the force, and on the mean streets of New York.

Bob Drury is the author/coauthor/editor of nine books. He has written for numerous publications, including The New York Times, Vanity Fair, Men’s Journal, and GQ. He is currently a contributing editor and foreign correspondent for Men’s Health. He lives in Manasquan, New Jersey.
Loading...
or
Not Currently Available for Direct Purchase