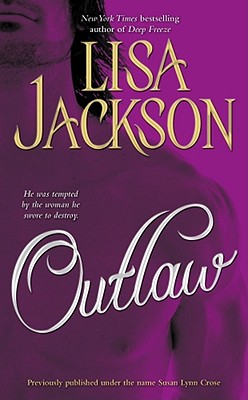 Stealthy and dangerous as the name he bears, Wolf, outlaw knight of Abergwynn, has no quarrel with the struggling young beauty in his arms. He has come to Tower Dwyrain to take his revenge against her bridegroom, a brutal nobleman Wolf has sworn to dishonor. Through this woman, Wolf thought he could carry out a carefully wrought vengeance. Instead, he finds a different fate -- a lady to fight for and to ennoble his dark, wayward soul.

Megan of Dwyrain has been haunted by a sorcerer's prediction that her castle would be destroyed, her arranged marriage doomed, and her enemy made her beloved. Now, in the iron grasp of the abductor who invaded her wedding, she beholds eyes that glitter not with hate but with devilment and spirit. She will challenge him, try to escape him, and yet find in him a Wolf she hungers to tame -- a knight who inspires a love that nothing, not dungeons dark nor the risk of death itself, can end.

Lisa Jackson is the #1 New York Times bestselling author of more than eighty-five novels, including Afraid to Die, Tell Me, You Don’t Want to Know, Running Scared, Without Mercy, Malice, and Shiver. She is also the coauthor of the Colony series, with her sister, Nancy Bush. There are over 20 million copies of Lisa Jackson’s books in print in twenty languages. She is a recipient of the RT Book Reviews Reviewers’ Choice Award and has also been honored with their Career Achievement Award for Romantic Suspense. Born in Oregon, she continues to make her home among family, friends, and dogs in the Pacific Northwest. Visit her at LisaJackson.com.
Loading...
or
Not Currently Available for Direct Purchase