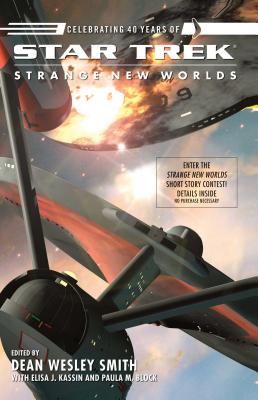 The tales featured in Strange New Worlds rocket readers across the length and breadth of Federation time and space, from Captain Jonathan Archer's first exploration of the galaxy on board the very first Starship Enterprise through to Captain Picard's tenure on the USS Enterprise 1701-D -- and beyond. Here you can read a fresh and original take on Captain Benjamin Sisko's role on Deep Space Nine, Captain Kathryn Janeway's homeward journey with the crew of the Starship Voyager, Captain Archer's encounters with the Xindi -- and many more ports of call along the way.

Considered one of the most prolific writers working in modern fiction, USA TODAY bestselling writer, Dean Wesley Smith published far over a hundred novels in forty years, and hundreds of short stories across many genres. He currently produces novels in four major series, including the time travel Thunder Mountain novels set in the old west, the galaxy-spanning Seeders Universe series, the urban fantasy Ghost of a Chance series, and the superhero series staring Poker Boy. During his career he also wrote a couple dozen Star Trek novels, the only two original Men in Black novels, Spider-Man and X-Men novels, plus novels set in gaming and television worlds.