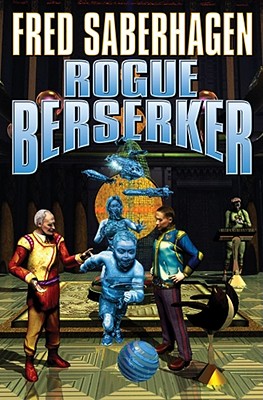 Harry Silver has already had a lifetime of trouble from ordinary Berserkers, the automated killing machines programmed an age ago to denude the galaxy of life. Now when his own family is kidnapped, he faces a deviant machine, a good fit for some or all of the Galactic Dictionary's definitions of ROGUE:
ROGUE: (1) A deceitful, double-dealing evildoer .. . (4) A fierce elephant or stamodont that has been banished from the herd . . . (10) Having a peculiarly malevolent or unstable nature . . . (11) No longer loyal, affiliated, or recognized, and hence not governable or accountable . . . erring, apostate. - Galactic Dictionary of the Common Tongue
Ordinary Berserkers armed with weapons powerful enough to kill an entire planet were enough of a nightmare. What worse deviltry will a killing machine gone rogue attempt-and even if Silver can stop it, will he ever see his family alive again?

Fred Saberhagen is the top-selling author of many popular science fiction and fantasy series. His Berserkers® have menaced the universe for over 40 years. His "Swords" and "Lost Swords" stories have caught the imagination of many fantasy readers. Equally intriguing are Saberhagen's exploits in the area of historical fantasy where figures such as Hitler and Lincoln, Daedalus and the pharaohs, populate his alternate worlds. On the border of history and fantasy Fred has created a unique picture of an old favorite, Dracula. More recent is the "Book of the Gods" series, a new telling of the ancient myths. Many of his works also appear in tape and e-book format. Before abandoning himself to imagination, he served in the US Air Force, worked as a civilian electronics technician, and wrote and edited articles on science and technology for the Encyclopedia Britannica. Born and raised in Chicago, he now lives and works with his wife, Joan Spicci, in Albuquerque, New Mexico.
or
Not Currently Available for Direct Purchase
Copyright © 2020 American Booksellers Association