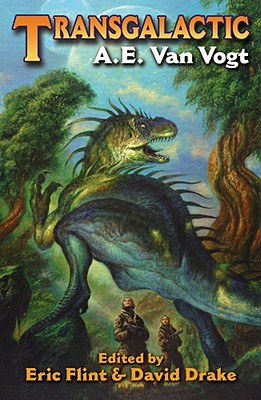 Empire of the Atom and The Wizard of Linn: Global war smashed civilization or so the legends told but not all of its machines. A caste of scientists arose who knew how to repair and operate the ancient machines but not how they worked and worshipped at the altars of the atomic gods who were said to make the machines run. Society was a strange mix of the modern and the medieval, with armies riding on horseback into huge spaceships, then flying to human colonies on other planets to wage war with swords and arrows. Then came the mutant Clane, who would have been put to death for his deformities had he not been born into the ruling family. Though his body was twisted, his mind was brilliant, and he not only recovered the lost science behind the ancient machines, but found the truth behind the legends of civilization's downfall. Alien invaders, not human war, had reduced humanity to barbarism as a prelude for a later return in force to colonize the Solar System. And that return would happen soon, unless Clane could find a way to stop it. . . . For the first time, the entire Clane saga, told in the two novels Empire of the Atom and The Wizard of Linn, is complete in one volume.
Mission to the Stars, Van Vogt's sweeping novel of interstellar adventure, is also included, along with the two short novels in the Ezwal series, chronicling the struggle of one man to convince a feral but intelligent species to join with humanity in the battle against a mutual enemy but first he must convince the lone Ezwal who is trapped with him in a deadly jungle to co-operate, or neither will survive.