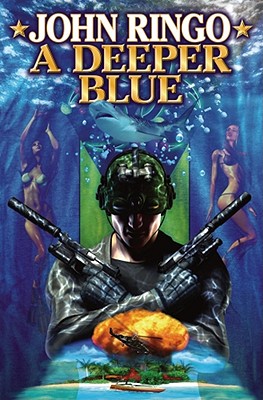 Sequel to Ghost, Kildar, Choosers of the Slain and Unto the Breach.
Heart-sick over the deaths of so many of his Keldara followers, and one in particular, former SEAL Mike Harmon, hero of Ghost, Kildar and Choosers of the Slain, decides to sit this one out. WMDs headed for the US no longer matter to the Kildar. But when his best friend and intel specialist both are seriously wounded in an ambush aimed at him, the Kildar gets his gameface back on. Mike has always said that he's not a nice guy, and he's about to prove it to a boatload of terrorists and Colombian drug dealers. Set in the Bahamas and Florida Keys, A Deeper Blue is a fast moving thriller that never slows down from the first page. With the return of some old faces, the action-packed novel proves, once again, the adage that sometimes it takes some very bad people to do good things.

John Ringo had visited 23 countries and attended 14 schools by the time he graduated high school. This left him with a wonderful appreciation of the oneness of humanity and a permanent aversion to foreign food. A veteran of the 82nd Airborne, he brings first-hand knowledge of military operations to his fiction. In addition to his nationally best-selling techno-thriller novels about Mike Harmon, his novels for Baen include the novels in the New York Times best-selling Posleen War series (A Hymn Before Battle, Gust Front, When the Devil Dances, and Hell's Faire), the Council War series (There Will be Dragons, Emerald Sea, Against the Tide, and East of the Sun, West of the Moon), the novel Into the Looking Glass, four collaborations with fellow New York Times bestselling author David Weber (March Upcountry, March to the Sea, March to the Stars and We Few) and three collaborative spinoffs from the Posleen series: Hero (with Michael Z. Williamson), Watch on the Rhine (with Tom Kratman) and the New York Times best seller Cally's War (with Julie Cochrane).
Loading...
or
Not Currently Available for Direct Purchase