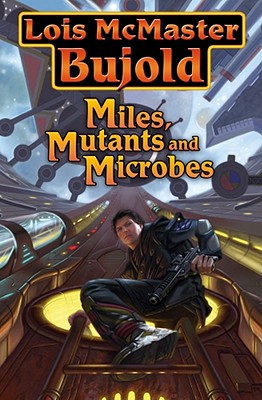 Two complete novels and a short novel in one large volume
Falling Free--The Nebula Award-winning novel. Leo Graf was just your typical efficient engineer: mind your own business and do the job. But all that changed on his assignment to the Cay Habitat, where children had been bio-engineered to have four arms (and no legs) to function in zero gravity. Now that they're no longer needed, a heartless mega corporation is getting rid of them before they eat into the profit margin. Leo Graf adopted 1000 quaddies--now he had to teach them to be free. "Labyrinth"--When Miles Vorkosigan is captured while on a secret mission to a lawless world, his only hope of escape is an unlikely pair of allies: a quaddie and a teenage werewolf. Diplomatic Immunity-- Miles Vorkosigan and his wife were heading home for the births of their first children, but a major diplomatic disaster is looming at Graf Station, colonized by the descendants of the original quaddies, and duty calls. Unfortunately, diplomatic immunity doesn't carry over to immunity from a very nasty biological weapon. The downside of being a troubleshooter comes when trouble starts shooting back. . . .