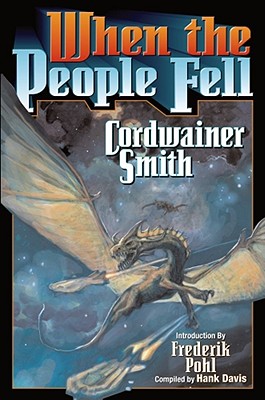 When the People Fell

A sweeping saga of the centuries to come, from the new dark age that followed a global war, to the new civilization that arose from the ashes to colonize the stars. At first, the colonists use ships with gigantic sails, cruising on the waves of starlight, their captains having to become something part human and part machine; then later moving by planoforming ships which travel faster than light, but must defend themselves against the malevolent, mind-devouring creatures lurking in the dark between the stars. Then came the reign of the all-powerful Lords of the Instrumentality, who ruled Earth and its colony worlds with ruthless benevolence, suffocating the human spirit for millennia--until the time of the Rediscovery of Man, when the strange, lost concept of freedom was reborn. . . . An extraordinary vision of a future unique in science fiction, praised by readers, critics, and major writers in the field. "Read this. Cordwainer Smith is timeless." --Terry Pratchett ." . . a truly unforgettable writer..." --David Brin
." . . a sophisticated, often poetic writer . . . these stories rank among the finest of all time. . . ."--Publishers Weekly

Cordwainer Smith was the pseudonym under which Dr. Paul Linebarger wrote science fiction. His first story, "Scanners Live in Vain," appeared in 1950 and rocked the science fiction world as few first stories have. He was born in Milwaukee, and grew up in Japan, China (where he became the godson of Sun Yat-Sen, then president of China), France and Germany. He was a Professor of Asiatic Studies at Johns Hopkins University, was on the U.S. Operations, Planning and Intelligence Board during World War II, and became a Colonel in Army Intelligence. After the war, he was advisor to the British forces in Malaya and to the U.S. Eighth Army in Korea, and wrote the book Psychological Warfare, regarded for decades after as the most authoritative text in the field. He died in 1966.
Loading...
or
Not Currently Available for Direct Purchase