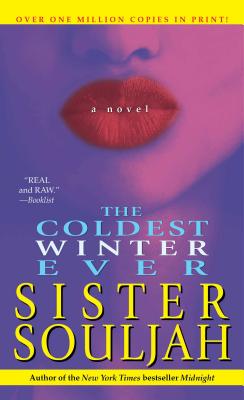 The Coldest Winter Ever

“50 Most Impactful Black Books Of The Last 50 Years” —Essence

I came busting into the world during one of New York's worst snowstorms, so my mother named me Winter. Ghetto-born, Winter is the young, wealthy daughter of a prominent Brooklyn drug-dealing family. Quick-witted, sexy, and business-minded, she knows and loves the streets like the curves of her own body. But when a cold Winter wind blows her life in a direction she doesn't want to go, her street smarts and seductive skills are put to the test of a lifetime. Unwilling to lose, this ghetto girl will do anything to stay on top.

Featuring a Special Collector’s Edition Reader’s Guide—including an author Q&A, detailed character analyses, and the author’s own remarks about the meaning of her story.

Praise For The Coldest Winter Ever…

"Sister Souljah is the #1 author of the hip-hop generation."
-- Sean "P. Diddy" Combs

"Compelling...tugs at the emotions."
-- Chicago Sun-Times

"Real and raw.... If a rap song could be a novel, it might resemble the coldest winter ever."
-- Booklist

Sister Souljah is a graduate of Rutgers University. During her college years, she was known for her powerful voice, sharp political analysis, cultural allegiance, community organizing, and for her humanity. Post-graduation, Sister Souljah earned the love and support of her African American community by creating a national youth and student movement. She is credited for serving homeless families, creating academic, cultural, and recreational after-school programs, weekend academies, and sleep-away summer camps. Partnering with major mainstream celebrities, she provided her efforts free to all young people and families in need. A multidimensional woman, Souljah was the only female performing artist and voice of Public Enemy. She is also a wife and a mother. A storyteller who makes the entire world her home, she lives wherever she is “pushing her pen.”
Loading...
or
Not Currently Available for Direct Purchase