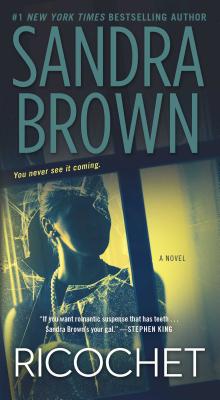 When Savannah detective Duncan Hatcher is summoned to an unusual crime scene, he knows discretion is key. Influential Judge Cato Laird’s beloved trophy wife, Elise, has fatally shot a burglar. She claims self-defense, but Duncan suspects she’s lying, and puts his career in jeopardy by investigating further. Then, in secret, Elise makes an incredible allegation, which he dismisses as the lie of a cunning woman trying to exploit his intense attraction to her. But when Elise goes missing, Duncan finds that trusting the wrong person could mean the difference between life and death for both of them.

Praise For Ricochet: A Novel…

"A stand-out thriller.... No one does steamy suspense like Brown." -- Publishers Weekly

Sandra Brown is the author of seventy-three New York Times bestsellers, has published over eighty novels, and has upwards of eighty million copies of her books in print worldwide. Her work has been translated into thirty-five languages. Four books have been adapted for film. She lives in Texas.
Loading...
or support indie stores by buying on