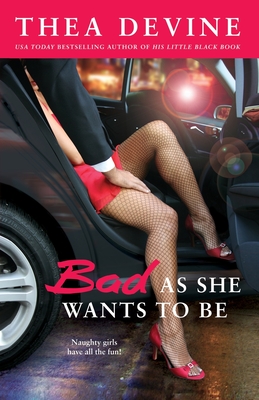 Bad As She Wants to Be

One hot summer's day, everything changes for Frannie Luttrell after she rescues rich, young Marianne Nyland from drowning. An innocent small-town girl from the other side of the Bar Harbor tracks, Frannie is rechristened "Frankie" and swept into Marianne's glamorous world of wanton sensuality and expensive fun. Soon she is enjoying decadent pleasures beyond her wildest imagination with any and every guy she desires -- except for the man she really wants, the ever-aloof Dax Cordrey, who disapproves of her new, indulgent life.

Offered a job as Marianne's personal assistant (aka permanent party pal) in New York City, Frankie and the insatiable Marianne hit the town on exotic nightly sexcapades, fulfilling their wildest fantasies. But when Marianne is found dead -- and Frankie is named her sole heir -- gossip flies like wildfire and a steamy sex tape featuring the Cinderella heiress suddenly appears. Deciding to make the most of her fifteen minutes of fame, Frankie acts the part of a publicity princess -- while trying to prove to Dax that she's not the scandalous vixen she's been made into. She's only as bad as she wants to be...for the right person.