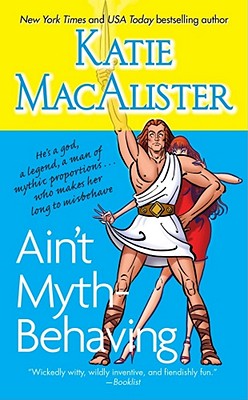 A modern woman and a god from ancient legend? Surely an epic love mismatch...or maybe it's the "myth match" of the century? The irrepressible Katie MacAlister brings us heroes who are more than mere mortals in two sparkling new novellas of the Otherworld.

STAG PARTY
Dane Hearne -- also known as the Irish fertility god Cernunnos -- must choose a bride quickly. His long-time goddess has run off with a salsa dancer, and Dane must be married by Beltane, just a week away, or become a mortal -- and die. When he meets American travel writer Megan St. Clair, he knows he's found his soul mate. But while Dane is a sexy Irish hunk with his fair share of blarney, can he convince Megan to marry him in just one week?

NORSE TRULY
Alrik Sigurdsson is cursed to sail his Viking ship along the same stretch of Scandinavian coastline forever. So when lovely American Brynna Lund skids her car off the road into the ocean, he and his men are happy for the diversion of rescuing her. Then Alrik discovers that Brynna is the only woman who can break the curse. Is it any wonder that he's determined to keep her...forever?

Growing up in a family where a weekly visit to the library was a given, Katie MacAlister spent much of her time with her nose buried in a book. When she was contracted to write a nonfiction book about software, her editor refused to allow her to include witty dialogue or love scenes, so Katie swiftly resolved to switch to fiction, in which she could indulge in world building, tormenting her characters, and falling madly in love with all her heroes. Her novels have been translated into numerous languages, been recorded as audiobooks, received several awards, and are regulars on the New York Times, USA TODAY, and Publishers Weekly bestseller lists. She also writes for the young adult audience as Katie Maxwell. Katie lives in the Pacific Northwest. You can visit her website at KatieMacAlister.com.
or
Not Currently Available for Direct Purchase