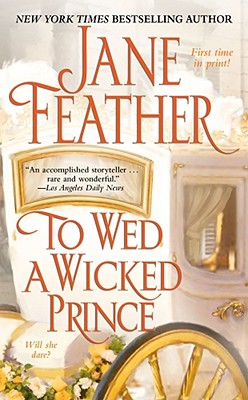 To Wed a Wicked Prince

Livia Lacey came to the house she inherited in London's Cavendish Square with her two friends, Lady Cornelia Dagenham and Lady Aurelia Farnham, to experience the excitement of city life. With Cornelia now happily married, Livia and Aurelia are on their own. But dashing Prince Alex Prokov, a newcomer to London, seems enchanted by Liv the moment they meet. Disarmed by the prince's determined pursuit of her, his exuberant joy of living, and the desires he awakens in her, Liv agrees to marry him.

But while night is a time for passionate embraces, Liv discovers that her irresistible husband can be as autocratic as he is extravagantly generous. While Alex balks at Liv's independent ways, he refuses to explain his own comings and goings. When Liv learns one of Alex's secrets she only loves him more. But when she learns the other secret, will she feel wickedly betrayed?

Jane Feather is the New York Times bestselling author of more than thirty sensual historical romances, including the Blackwater Bride series. She was born in Cairo, Egypt, and grew up in the south of England. She currently lives in Washington, DC, with her family. There are more than 10 million copies of her books in print.
Loading...
or
Not Currently Available for Direct Purchase