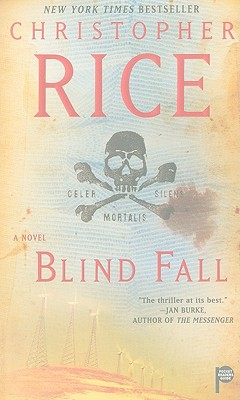 John Houck became a Marine to become a hero. But his life changed when he failed to notice an explosive device that ended up maiming his captain, a respected military man who nearly sacrificed himself to save John’s life. Home from Iraq, John pays a visit to his former captain, only to discover the captain has been gruesomely murdered. John pursues a strange man he sees running from the scene, but he discovers that Alex Martin is not the murderer. Alex is, in fact, the former captain’s secret male lover and the killer’s intended next victim.

A gripping story of honor and integrity, of turning failure into victory, Blind Fall is the story of two men, one a Marine, one gay, who must unite to avenge the death of the man they both loved—one as a brother-in-arms, one as a lover—and to survive.

Praise For Blind Fall: A Novel…

"Blind Fall is a tale of heroism and cowardice, a yearning search for redemption and acceptance, and a haunting portrayal of characters, both gay and straight. Christopher Rice writes with a sharp eye and a full heart." -- T. Jefferson Parker, author of Storm Runners and The Fallen

"The name Rice is synonymous with seamless and sensitive prose, and Christopher lives up to that name....A timely and compelling story, with shadings and ambiguities that demonstrate Chris's maturity as a writer." -- Sandra Brown, author of Play Dirty and Ricochet

"Christopher Rice is a phenomenal writer, and Blind Fall is exquisite proof of that fact. He brings unforgettable characters and unrelenting suspense together in a powerful story that will stay with you long after you've closed the back cover. This is the thriller at its best." -- Jan Burke, author of Kidnapped and Bloodlines

"Christopher Rice has written a high-style, high-speed thriller with a furious rhythm and pace that will satisfy his legion of fans and find him plenty of new ones." -- Mark Childress, author of One Mississippi and Crazy in Alabamas

"Rice keeps the reader turning pages at every step of the way. He manages to combine a complex, fast-moving plot with a tale of forgiveness and redemption, in an examination of the many facets of relationships between men -- whether they are loving, violent, fearful or redemptive." -- New Orleans Times Picayune

"Blind Fall is a tale of the moral choices human beings make, of the personal redemption that can come when one man reaches out to pull someone else back from the abyss." -- New Orleans Times Picayune