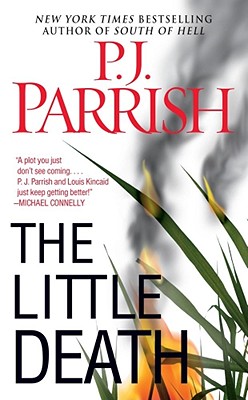 When the headless corpse of a young man is discovered in glamorous Palm Beach, Louis sets his sights on his most likely suspect—a prominent female U.S. Senator with a history of scandal and a known penchant for sadistic and dangerous sex. Then a second headless body turns up and the trail runs cold, allowing the real killer to slip in dangerously close, intent on making Louis’s best friend the next victim.

Beautifully written yet packed with raw power, The Little Death is a suspenseful thriller of the highest order and will satisfy fans of writers such as Ed McBain, James Patterson, and Michael Connolly.

P. J. Parrish is actually two sisters—Kristy Montee and Kelly Nichols—who pooled their talents and their lifelong love of writing to create the character of Louis Kincaid. Their New York Times and USA TODAY bestselling novels include An Unquiet Grave, A Killing Rain, Island of Bones, Thicker Than Water, Paint It Black, Dead of Winter, and Dark of the Moon. They are also the authors of a standalone thriller, The Killing Song.
Loading...
or support indie stores by buying on
(This book is on backorder)