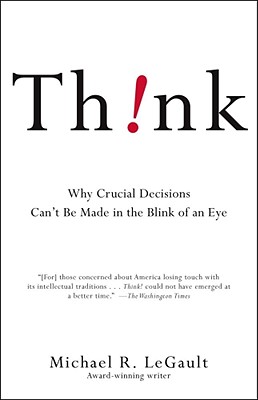 Outraged by the downward spiral of intellect and culture, Michael LeGault offers the flip side of Malcolm Gladwell's bestselling phenomenon, Blink, which theorized that our best decision-making is done on impulse, without factual knowledge or critical analysis. If bestselling books are advising us to not think, LeGault argues, it comes as no surprise that sharp, incisive reasoning has become a lost art in the daily life of people everywhere.

Somewhere along the line, the Age of Reason morphed into the Age of Emotion; this systemic erosion is costing time, money, jobs, and lives in the twenty-first century, leading to less fulfilment and growing dysfunction. LeGault provides a bold, controversial, and objective analysis of the causes and solutions for some of the biggest problems facing Western culture in the 21st century. From the over- load of reality TV shows and gossip magazines that have rendered curiosity of the mind and spirit obsolete to permissive parenting and low standards that have caused an academic crisis among our children, LeGault looks at all aspects of modern lives and points to how and where it all went wrong.

Michael R. LeGault is an award-winning editor and writer, and a former columnist for the Washington Times. His reviews, opinion columns, and features have appeared in newspapers, journals, and magazines across North America. An American citizen based in Toronto, LeGault has worked for and been a consultant to major U.S. companies on health, safety, environmental, and quality issues. He received his B.S. from the University of Michigan and his M.S. from the University of Miami, Florida. LeGault is currently an editor at the National Post. He and his wife, Anneli, have two children.

Praise For Think!: Why Crucial Decisions Can't Be Made in the Blink of an Eye…

"[For] those concerned about America losing touch with its intellectual traditions . . . Think! could not have emerged at a better time." -- The Washington Times
or support indie stores by buying on
Copyright © 2020 American Booksellers Association