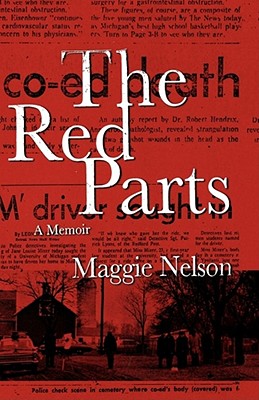 “If I could read the work of only one writer for the rest of my life, I think I would be happy to spend the rest of my days in the staggering beauty of Nelson's prose. In The Red Parts, what could have merely been a relatively interesting true crime narrative becomes, instead, a wholly original memoir of pain, history, family, and those bright moments of clarity in a world that, for Nelson, had become so dark. This book asks us to wonder, to be angry, and ultimately to become more human. This is an inescapable, utterly compelling read.”
— Claire Tobin, Literati Bookstore, Ann Arbor, MI
View the List

One day in March 1969, twenty-three- year-old Jane Mixer was on her way home to tell her parents she was getting married. She had arranged for a ride through the campus bulletin board at the University of Michigan in Ann Arbor, where she was one of a handful of pioneering women students at the law school. Her body was found the following morning just inside the gates of a small cemetery fourteen miles away, shot twice in the head and strangled.

Six other young women were murdered around the same time, and it was assumed they had all been victims of alleged serial killer John Collins, who was convicted of one of these crimes not long after. Jane Mixer's death was long considered to be one of the infamous Michigan Murders, as they had come to be known. But officially, Jane's murder remained unsolved, and Maggie Nelson grew up haunted by the possibility that the killer of her mother's sister was still at large.

In an instance of remarkable serendipity, more than three decades later, a 2004 DNA match led to the arrest of a new suspect for Jane's murder at precisely the same time that Nelson was set to publish a book of poetry about her aunt's life and death -- a book she had been working on for years, and which assumed her aunt's case to be closed forever.

The Red Parts chronicles the uncanny series of events that led to Nelson's interest in her aunt's death, the reopening of the case, the bizarre and brutal trial that ensued, and the effects these events had on the disparate group of people they brought together. But The Red Parts is much more than a "true crime" record of a murder, investigation, and trial. For into this story Nelson has woven a spare, poetic account of a girlhood and early adulthood haunted by loss, mortality, mystery, and betrayal, as well as a subtle but blistering look at the personal and political consequences of our cultural fixation on dead (white) women.

The result is a stark, fiercely intelligent, and beautifully written memoir that poses vital questions about America's complex relationship to spectacles of violence and suffering, and that scrupulously explores the limits and possibilities of honesty, grief, empathy, and justice.