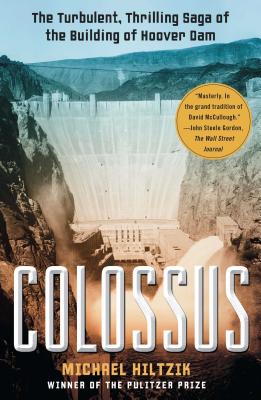 The Turbulent, Thrilling Saga of the Building of Hoover Dam

As breathtaking today as when it was completed, Hoover Dam ranks among America’s most awe-inspiring, if dubious, achievements. This epic story of the dam—from conception to design to construction—by Pulitzer Prize–winning journalist and Los Angeles Times columnist Michael Hiltzik exposes the tremendous hardships and accomplishments of the men on the ground—and in the air—who built the dam and the demonic drive of Frank Crowe, the boss who pushed them beyond endurance. It is a tale of the tremendous will exerted from start to finish, detailing the canny backroom dealings by Herbert Hoover and Franklin D. Roosevelt, the herculean engineering challenges Crowe faced, and the terrific union strikes by the men who daily fought to beat back the Colorado River. Colossus tells an important part of the story of America’s struggle to pull itself out of the Great Depression by harnessing the power of its population and its natural resources.

Praise For Colossus: The Turbulent, Thrilling Saga of the Building of Hoover Dam…

“Masterly. In the grand tradition of David McCullough. [Hiltzik] fixes the endeavor in its time and captures the personalities of the people involved. May inspire in readers a longing for something…that will summon up once again America's famous self-confidence and daring.”—John Steele Gordon, Wall Street Journal

“Hiltzik tells the dam's tale well, with majestic sweep and a degree of detail that by rights ought to be numbing, but isn't; every iota of material fits snugly into the narrative, which, unlike the river, flows freely.” —San Francisco Chronicle


“[COLOSSUS is a] detailed and vividly written study – destined to be the standard history for decades to come.” —Washington Post

“The parade of grim particulars might make Colossus a depressing read were it not for the vigor of Hiltzik's prose and the lively gallery of individual portraits and anecdotes that convey a wonderfully textured sense of what it was like to work on Hoover Dam.”—Los Angeles Times

"Fascinating. A construction epic..of a beautiful immensity, a piece of infrastructure without compare..reflecting Depression-era America [and] astutely conveying the characters of its creators. Hiltzik marvelously captures the times of the Hoover Dam." — Booklist

Michael Hiltzik is a Pulitzer Prize–winning journalist and author who has covered business, technology, and public policy for the Los Angeles Times for three decades. He currently serves as the Times’s business columnist and hosts its business blog, The Economy Hub. His books include Big Science, The New Deal, Colossus, Dealers of Lightning, and The Plot Against Social Security. Mr. Hiltzik received the 1999 Pulitzer Prize for articles exposing corruption in the entertainment industry. He lives in Southern California with his wife and two children. Follow him on Twitter @HiltzikM.
Loading...
or support indie stores by buying on