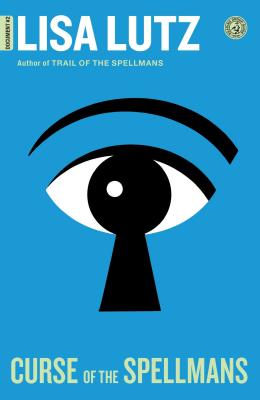 Curse of the Spellmans (Paperback)

“This second entry in the nonstop, frenzied, comedic world of Isabel Spellman, P.I., is both more convoluted and funny than The Spellman Files. This time, Izzy finds herself confounded by nearly everyone in her life and, of course, unable to leave anyone alone until she gets to the bottom of the many mysteries surrounding her -- including her weirder-than-usual family.”
— Terry Gilman, Mysterious Galaxy Books, San Diego, CA
View the List

In this sidesplittingly funny follow-up to the New York Times bestselling The Spellman Files, San Francisco's own highly functioning yet supremely dysfunctional family of private investigators are back on the case in another mystery full of suspicion, surveillance, humor, and surprise from award-winning author Lisa Lutz. Curse of the Spellmans was nominated for both the Edgar Award and the Macavity Award, and the Izzy Spellman Mysteries have earned comparisons to everything from Carl Hiaasen and Janet Evanovich to Veronica Mars and Bridget Jones. When Izzy Spellman, PI, is arrested for the fourth time in three months, she writes it off as a job hazard. She's been (obsessively) keeping surveillance on a suspicious next door neighbor (suspect's name: John Brown), convinced he's up to no good--even if her parents (the management at Spellman Investigations) are not. When the (displeased) management refuses to bail Izzy out, it is Morty, Izzy's octogenarian lawyer, who comes to her rescue. But before he can build a defense, he has to know the facts. Over weak coffee and diner sandwiches, Izzy unveils the whole truth and nothing but the truth--as only she, a thirty-year-old licensed professional, can. When not compiling Suspicious Behavior Reports on all her family members, staking out her neighbor, or trying to keep her sister, Rae, from stalking her "best friend," Inspector Henry Stone, Izzy has been busy attempting to apprehend the copycat vandal whose attacks on Mrs. Chandler's holiday lawn tableaux perfectly and eerily match a series of crimes from 1991-92, when Izzy and her best friend, Petra, happened to be at their most rebellious and delinquent. As Curse of the Spellmans unfolds, it's clear that Morty may be on retainer, but Izzy is still very much on the case...er, cases--her own and that of every other Spellman family member. Lisa Lutz brings her trademark wit and humor back in what Publishers Weekly calls a "sparkling sequel." (Re)meet the Spellmans, a family in which eavesdropping is a mandatory skill, locks are meant to be picked, past missteps are never forgotten, and blackmail is the preferred form of negotiation--all in the name of unconditional love.

Praise For Curse of the Spellmans: Document #2 (Izzy Spellman Mysteries)…

“ONE OF THE BEST COMIC NOVELS I’VE EVER READ, AND THAT INCLUDES CARL HIAASEN AND JANET EVANOVICH.”

—THE GLOBE AND MAIL