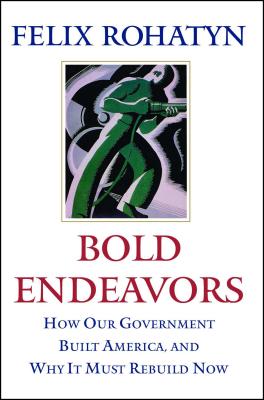 How Our Government Built America, and Why It Must Rebuild Now

In this timely and urgent book, Rohatyn re-creates some of the most dramatic events in our history to show how strong and imaginative political leadership built America and demonstrates that such leadership is essential today to reverse the catastrophic degeneration of America’s infrastructure, bridges, tunnels, roads and rails, flood levees and gates. Readers of David McCullough and Stephen Ambrose will revel in his narrative. Although the private sector has been the mainstay of America’s economy, Felix Rohatyn argues the country could not have grown into its full destiny without the vision and determination of political leaders who imagined the future and acted to achieve it.

He begins with the Louisiana Purchase by Thomas Jefferson in 1805, which doubled the size of the country, and the construction of the Erie Canal in 1817-1825, which opened a water route to the West. The chartering of the Trans-Continental railroad, the Land Grant Colleges, and the Homestead Act in 1863, led by Abraham Lincoln during the Civil War, together opened the continent. The Panama Canal, which joined the east and West coasts by sea, was driven by Theodore Roosevelt. FDR’s Tennessee Valley Authority (TVA) and Eisenhower’s Interstate Highway program modernized America, and the GI Bill of rights, which came after World War II, remains the greatest investment in intellectual capital and housing in our history.

Rohatyn describes these enterprises as examples of the imagination and decisive leadership that the country is in desperate need of, and, in a final chapter, he predicts the multiple benefits of similarly bold undertakings to secure our nation’s future and offers a blueprint for setting priorities and financing them.

Felix G. Rohatyn is Special Advisor to the Chairman and CEO of the investment banking firm Lazard Freres & Co., LLC. He is a frequent contributor to The New York Review of Books. Previously, Rohatyn has been the managing director at Lazard, the chairman of the Municipal Assistance Corporation to the State of New York, and the U.S. ambassador to France. He lives in New York with his wife, Elizabeth .
Loading...
or support indie stores by buying on