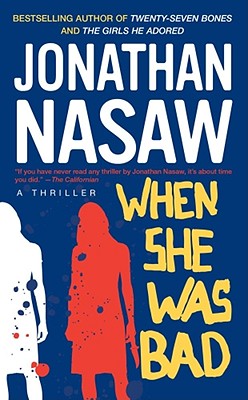 When She Was Bad (Mass Market)

The author of Twenty-Seven Bones and The Girls He Adored delivers another nailbiting thriller featuring former FBI agent E. L. Pender. Breathtaking and suspenseful, yet leavened with a perverse and quirky humor, When She Was Bad examines the terrifying relationship between two hot young lovers who also happen to be coldblooded killers.

"Multiples in love: imagine the possibilities," said one of the twisted couple's earlier victims. Lily DeVries and Ulysses Maxwell have quite a few things in common. Both were horrifically abused as children, then diagnosed with multiple personality disorder, and eventually incarcerated in the same Oregon mental institution. There, they fell into the hands of the well-meaning, genially sinister director, Dr. Al.

When the ingenious lovers engineer a bloody escape, the only people who have a chance of stopping them are the rumpled, endearingly flawed E. L. Pender and Dr. Irene Cogan, a brilliant psychiatrist who loves Lily almost as much as she fears Maxwell. With the aid of a private investigator, Pender and Cogan take on a pair of killers who win hearts as easily as they slit throats.

A sexually charged thriller of undeniable originality and page-turning suspense, When She Was Bad moves at a rapid clip from the inner recesses of two twisted psyches to a terrifying climax and brilliantly realized finale.

Emotionally taut and difficult to put down, this tale of sex, romance, madness, and murder will not disappoint.

Jonathan Nasaw is the acclaimed author of Fear Itself and The Girls He Adored, both Literary Guild Selections. He lives in Pacific Grove, California.
or
Not Currently Available for Direct Purchase
Copyright © 2020 American Booksellers Association