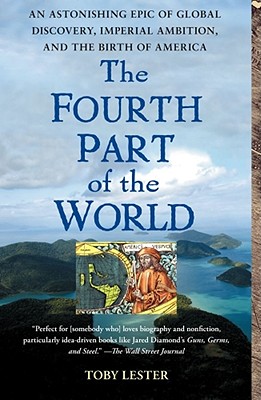 The Fourth Part of the World

An Astonishing Epic of Global Discovery, Imperial Ambition, and the Birth of America

“The Fourth Part of the World is not a history book you can pigeonhole: map making, printing, transportation, exploration, and imperialism all influence this great story. Perhaps most enjoyable is learning about the evolving mythology associated with the edges of the map, and how it persists through discoveries great and small.”
— Justin Fetterman, The Alabama Booksmith, Birmingham, AL
View the List

"Old maps lead you to strange and unexpected places, and none does so more ineluctably than the subject of this book: the giant, beguiling Waldseem ller world map of 1507." So begins this remarkable story of the map that gave America its name. For millennia Europeans believed that the world consisted of three parts: Europe, Africa, and Asia. They drew the three continents in countless shapes and sizes on their maps, but occasionally they hinted at the existence of a "fourth part of the world," a mysterious, inaccessible place, separated from the rest by a vast expanse of ocean. It was a land of myth--until 1507, that is, when Martin Waldseem ller and Matthias Ringmann, two obscure scholars working in the mountains of eastern France, made it real. Columbus had died the year before convinced that he had sailed to Asia, but Waldseem ller and Ringmann, after reading about the Atlantic discoveries of Columbus's contemporary Amerigo Vespucci, came to a startling conclusion: Vespucci had reached the fourth part of the world. To celebrate his achievement, Waldseem ller and Ringmann printed a huge map, for the first time showing the New World surrounded by water and distinct from Asia, and in Vespucci's honor they gave this New World a name: America. The Fourth Part of the World is the story behind that map, a thrilling saga of geographical and intellectual exploration, full of outsize thinkers and voyages. Taking a kaleidoscopic approach, Toby Lester traces the origins of our modern worldview. His narrative sweeps across continents and centuries, zeroing in on different portions of the map to reveal strands of ancient legend, Biblical prophecy, classical learning, medieval exploration, imperial ambitions, and more. In Lester's telling the map comes alive: Marco Polo and the early Christian missionaries trek across Central Asia and China; Europe's early humanists travel to monastic libraries to recover ancient texts; Portuguese merchants round up the first West African slaves; Christopher Columbus and Amerigo Vespucci make their epic voyages of discovery; and finally, vitally, Nicholas Copernicus makes an appearance, deducing from the new geography shown on the Waldseem ller map that the earth could not lie at the center of the cosmos. The map literally altered humanity's worldview. One thousand copies of the map were printed, yet only one remains. Discovered accidentally in 1901 in the library of a German castle it was bought in 2003 for the unprecedented sum of $10 million by the Library of Congress, where it is now on permanent public display. Lavishly illustrated with rare maps and diagrams, The Fourth Part of the World is the story of that map: the dazzling story of the geographical and intellectual journeys that have helped us decipher our world.

Praise For The Fourth Part of the World: An Astonishing Epic of Global Discovery, Imperial Ambition, and the Birth of America…

“Marvelously imaginative, exhaustively researched. . . . Guiding the reader Virgil-like through the Age of Discovery, Lester introduces a chronologically and conceptually vast array of Great Men (Columbus, Vespucci, Polo, Copernicus, et al.), competing theories, monastic sages, forgotten poets, opportunistic merchants, unfortunate slaves, and more. That he relates it all so cleanly and cogently—via elegant prose, relaxed erudition, measured pacing, and purposeful architecture—is a feat. That he proffers plentiful visual delights, including detailed views of the legendary document, is a gift. This map, Lester writes, ‘draws you in, reveals itself in stages, and doesn’t let go.’ Nor does this splendid volume.”

“An intellectual detective story. By using the [Waldseemüller] map as a lens through which to view a nexus of myth, imagination, technology, stupidity, and imperial ambition, Lester has penned a provocative, disarming testament to human ambition and ingenuity.”

Lester pulls on the threads of Waldseemüller's map and finds an extraordinary braid of influences. [He] builds a cumulative tale of rich, diverse influences that he juggles with gathering speed and showmanship until the whir of detail coalesces into an inspired, imaginative piece of mapmaking.”—San Francisco Chronicle

“Fascinating. Without Toby Lester's fine book, the Waldseemüller Map might remain an interesting historical footnote. Instead, one now understands the creation of the map as a world-changing moment, "a birth certificate for the world that came into being in 1492 -- and a death warrant for the one that was there before.’"—Minneapolis Star-Tribune

“Lester captures the passion, curiosity and, at times, the hubris behind the European explorations. His real interest lies in the evolution of Europeans' perception of the world, as reflected by their maps, an approach that works splendidly. To mid-millennial Europeans, there was nothing over the western sea but mystery and legends about islands, monsters and mythical beings. It took courage to sail off into that unknown, and Lester's book offers a clear survey of how people came to understand the world in which they lived.”

“Maps – intricate, absurd, fantastical, ridiculous – fill this beautiful book, reinforcing Lester’s thesis that they tell us as much about their makers as our surroundings. The heretofore unknown fourth part of the world was an enormous, unspoiled continent whose natural resources could be exploited and whose natives could be converted, sold into slavery, or exterminated. Like any train wreck, the controversies of this historical moment fascinate.”

“With the excitement and exhilaration of an explorer, Atlantic contributor Lester sets off on his own journey of discovery across the seas of cartography and history. . . . Lester traces the map’s journey to America over the next century in a majestic tribute to a historic work.”


“An engrossing adventure for both general and informed lay readers. Similar to K.A. Seaver’s Maps, Myths, and Men: The Story of the Vinland Map, this is highly recommended for anyone with an interest in cartography, the Age of Exploration, or European intellectual history.”


“A swift, sweeping primer on the Age of Discovery and the legacy of mapmaking. Lester begins with the amazing story of an obscure German cartographer, Martin Waldseemuller. . . . As the Age of Discovery progressed, with the likes of Columbus, Cabot, Vespucci and the Portuguese navigators testing new margins, the race of the scientists and cartographers to keep up-separating self-promotion from fact-becomes a fascinating saga, ably captured in Lester's hands.”—Kirkus Reviews

"In this sumptuous, lavishly illustrated history of map-making and the visions of the world it incarnated, Toby Lester presents an epic tale of mariners and explorers, monks and merchants, popes and kings from Ptolemy's first-century Guide to Drawing a World Map to the centerpiece of this book, Martin Waldseemuller's 1507 map on which the word "America" first appears. A fascinating, tortuously dogged (on the part of scribes and friars), meticulously detailed tale of how various maps came to be amid the humanist stirrings of Florence, the early Portuguese explorations of Africa. Lester's account sparkles with wit and tidbits."--The Providence Journal