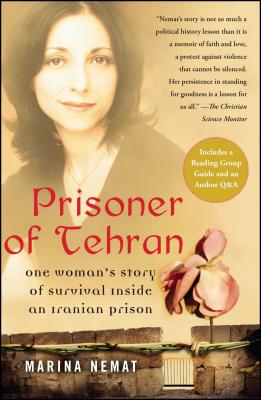 One Woman's Story of Survival Inside an Iranian Prison

In her heartbreaking, triumphant, and elegantly written memoir, Prisoner of Tehran, Marina Nemat tells the heart-pounding story of her life as a young girl in Iran during the early days of Ayatollah Khomeini's brutal Islamic Revolution.

What would you give up to protect your loved ones? Your life?

In her heartbreaking, triumphant, and elegantly written memoir, Prisoner of Tehran, Marina Nemat tells the heart-pounding story of her life as a young girl in Iran during the early days of Ayatollah Khomeini's brutal Islamic Revolution.

In January 1982, Marina Nemat, then just sixteen years old, was arrested, tortured, and sentenced to death for political crimes. Until then, her life in Tehran had centered around school, summer parties at the lake, and her crush on Andre, the young man she had met at church. But when math and history were subordinated to the study of the Koran and political propaganda, Marina protested. Her teacher replied, "If you don't like it, leave." She did, and, to her surprise, other students followed.

Soon she was arrested with hundreds of other youths who had dared to speak out, and they were taken to the notorious Evin prison in Tehran. Two guards interrogated her. One beat her into unconsciousness; the other, Ali, fell in love with her.

Sentenced to death for refusing to give up the names of her friends, she was minutes from being executed when Ali, using his family connections to Ayatollah Khomeini, plucked her from the firing squad and had her sentence reduced to life in prison. But he exacted a shocking price for saving her life -- with a dizzying combination of terror and tenderness, he asked her to marry him and abandon her Christian faith for Islam. If she didn't, he would see to it that her family was harmed. She spent the next two years as a prisoner of the state, and of the man who held her life, and her family's lives, in his hands.

Lyrical, passionate, and suffused throughout with grace and sensitivity, Marina Nemat's memoir is like no other. Her search for emotional redemption envelops her jailers, her husband and his family, and the country of her birth -- each of whom she grants the greatest gift of all: forgiveness.

Marina Nemat grew up in Tehran, Iran. In 1991, she emigrated to Toronto, Ontario, where she now lives with her husband, Andre, and their two sons.

Praise For Prisoner of Tehran: One Woman's Story of Survival Inside an Iranian Prison…

"Like a harrowing Thousand and One Arabian Nights, Prisoner of Tehran is the story of Marina Nemat -- her unvarnished courage, her intrepid wisdom, her fight to save her integrity and her family in a world in which to be female is to be chattel. Written with the deft hands of a novelist, it is the portrait of a world only too real, where women's lives are cheap -- but not this one." -- Jacquelyn Mitchard, author of The Deep End of the Ocean and Cage of Stars