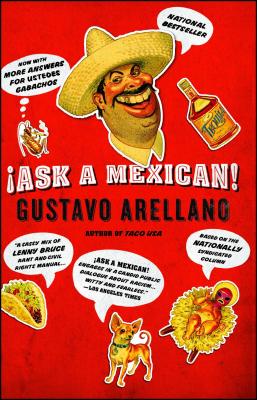 ¡Ask a Mexican! is a collection of questions and answers from Gustavo Arellano that explore the clichés of lowriders, busboys, and housekeepers; drunks and scoundrels; heroes and celebrities; and most important, millions upon millions of law-abiding, patriotic American citizens and their illegal-immigrant cousins who represent some $600 billion in economic power.

At a strong eighteen percent of the U.S. population, Latinos have become America's largest minority—and Mexicans make up a large part of that number. Gustavo confronts the bogeymen of racism, xenophobia, and ignorance prompted by such demographic changes through answering questions put to him by readers of his ¡Ask a Mexican! column in California's OC Weekly. He challenges readers to find a more entertaining way to understand Mexican culture that doesn't involve a taco-and-enchilada combo.

From lighter topics like Latin pop and great Mexican food to more serious issues like immigration and race relations, ¡Ask a Mexican! ​runs the gamut. Why do Mexicans call white people gringos? Are all Mexicans Catholic? What's the best tequila? Gustavo answers a wide range of legitimate and illegitimate questions, in the hopes of making a few readers angry, making most of us laugh, sparking a greater dialogue, and enhancing cross-cultural understanding.

Gustavo Arellano’s ¡Ask a Mexican! column has a circulation of more than two million in thirty-eight markets (and counting). He has received the President’s Award from the Los Angeles Press Club, an Impact Award from the National Hispanic Media Coalition, and a 2008 Latino Spirit Award from the California State legislature. Arellano has appeared on the Today show, Nightline, NPR’s Talk of the Nation, and The Colbert Report.
Loading...
or
Not Currently Available for Direct Purchase