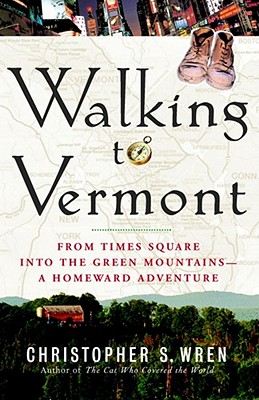 From Times Square into the Green Mountains -- a Homeward Adventure

A distinguished former foreign correspondent embraces retirement by setting out alone on foot for nearly four hundred miles, and explores a side of America nearly as exotic as the locales from which he once filed.
Traveling with an unwieldy pack and a keen curiosity, Christopher Wren bids farewell to the New York Times newsroom in midtown Manhattan and saunters up Broadway, through Harlem, the Bronx, and the affluent New York suburbs of Westchester and Putnam Counties. As his trek takes him into the Housatonic River Valley of Connecticut, the Berkshires of Massachusetts, the Green Mountains of Vermont, and along a bucolic riverbank in New Hampshire, the strenuous challenges become as much emotional as physical.
Wren loses his way in a suburban thicket of million-dollar mansions, dodges speeding motorists, seeks serenity at a convent, shivers through a rainy night among Shaker ruins, camps in a stranger's backyard, panhandles cookies and water from a good samaritan, absorbs the lore of the Appalachian and Long Trails, sweats up and down mountains, and lands in a hospital emergency room.
Struggling under the weight of a fifty-pound pack, he gripes, "We might grow less addicted to stuff if everything we bought had to be carried on our backs." He hangs out with fellow wanderers named Old Rabbit, Flash, Gatorman, Stray Dog, and Buzzard, and learns gratitude from the anonymous charity of trail angels. His rite of passage into retirement, with its heat and dust and blisters galore, evokes vivid reminiscences of earlier risks taken, sometimes at gunpoint, during his years spent reporting from Russia, China, the Middle East, Southeast Asia, South America, and Africa.
He loses track of time, waking with the sun, stopping to eat when hunger gnaws, and camping under starry skies that transform the nights of solitude. For all the self-inflicted hardship, he reports, "In fact, I felt pretty good." Wren has woven an intensely personal story that is candid and often downright hilarious. As Vermont turns from a destination into a state of mind, he concludes, "I had stumbled upon the secret of how utterly irrelevant chronological age is."
This book, from the author of the acclaimed bestseller The Cat Who Covered the World, will delight not just hikers, walkers, and other lovers of the outdoors, but also anyone who contemplates retirement, wonders about foreign correspondents, or relishes a lively, off-beat adventure, even when it unfolds close to home.

Praise For Walking to Vermont: From Times Square into the Green Mountains -- a Homeward Adventure…

David Breashears co-director and leader of the Everest IMAX Filming Expedition Wren looks at everything with the eyes and ears of an intrepid reporter and a man of great integrity and disarming humor. He describes the beauty of the home countryside he traverses and introduces us to a variety of colorful characters. Most poignant are the moments on the trail when he is reminded of a powerful, dangerous, or comical moment in one of the many far-flung places he went as a foreign correspondent.

Evan Thomas author of John Paul Jones: Sailor, Hero, Father of the American Navy A foreign correspondent walks out of his office at the New York Times and heads uptown -- for four hundered miles by foot. A fascinating journey with lots of adventures by a keen-eyed and honest man. You'll want to go with him.

David Roberts author of Four Against the Arctic and Escape from Lucania A charming account of a long walk into retirement, this memoir gains depth and complexity as trailside incidents trigger flashbacks from Chris Wren's years as a foreign correspondent in some of the most dangerous places on Earth.

Roger Rosenblatt Where Christopher Wren walks is always an exotic country, even when the terrain is the Bronx, Westchester, and Vermont. He brings a first-class foreign correspondent's eye and meditative memory to the familiar, which becomes wonderfully strange. Best of all, he brings his love of adventure to the adventure of his life. What great luck that he asked us along.

Christopher S. Wren retired from The New York Times after nearly twenty-nine years as a reporter, foreign correspondent, and editor. He headed the Times’ news bureaus in Moscow, Cairo, Beijing, Ottawa, and Johannesburg; covered the United Nations; and reported from the former Soviet Union, Eastern Europe, the Balkans, the Middle East, China, Southeast Asia, Africa, South America, and Canada. He taught at Princeton University before coming to Dartmouth, where he is visiting professor in its Master of Arts in Liberal Studies program. He is the author of Those Turbulent Sons of Freedom.
Loading...
or support indie stores by buying on