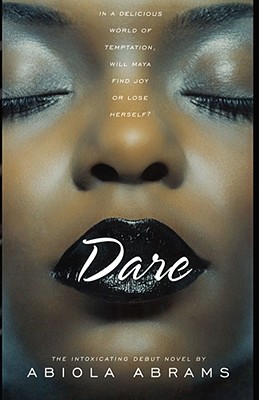 Meet Maya Hope. Double-dipped in cocoa with brick-house curves, she's a lover of jazz, a political poet, and a sociologist. Her best friend and roommate, Athena Jackson, is her opposite in every way—a petite ex-cheerleader who's always blaring rap, grinding out rhymes, and ready to take the next man home. When Maya is forced to pinch-hit in an audition and bust Athena's rhymes, she finds herself on an undercover escapade in the wild world of hip-hop as the raw, sexy, roughneck Jezebel. After striking a deal with her own personal devil, Maya sets off on the tempting roller-coaster ride of a lifetime—finding music, more fun than she's ever had, and even a man or two...but not without consequences. Brimming with electric sensuality, Dare is an unforgettable, envelope-pushing odyssey of two gutsy women playing by their own rules.

ABIOLA ABRAMS is the host of BET's hit indie film competition The Best Shorts, airing throughout the United States and the Caribbean. As a writer, filmmaker, and self-proclaimed TV big mouth, her goal is to use pop culture to create uncommon inspiration: politically, emotionally, and sexually. Abiola's writing is featured in Eve Ensler's anthology A Memory, a Monologue, a Rant, and a Prayer and the upcoming anthology Behind the Bedroom Door, edited by Self magazine's Paula Derrow. Abiola's art films range from edgy "chick flicks" to socially conscious documentaries. Her work has been seen in theaters, museums, galleries, and festivals worldwide. Dare is her debut novel. Find out more at her interactive website: www.thegoddessfactory.com.
Loading...
or support indie stores by buying on