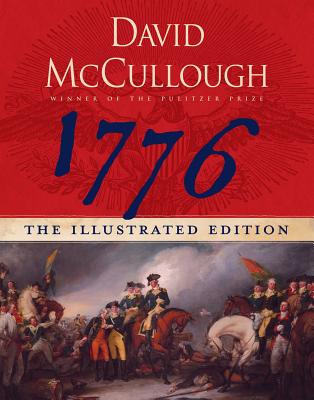 With a new introduction by David McCullough, 1776: The Illustrated Edition brings 140 powerful images and thirty-seven removable replicas of source documents to this remarkable drama.

In 1776, David McCullough’s bestselling account of a pivotal year in our nation’s struggle, readers learned of the greatest defeats, providential fortune, and courageous triumphs of George Washington and his bedraggled army. Now, in 1776: The Illustrated Edition, the efforts of the Continental Army are made even more personal, as an excerpted version of the original book is paired with letters, maps, and seminal artwork. More than three dozen source documents—including a personal letter George Washington penned to Martha about his commission, a note informing the mother of a Continental soldier that her son has been taken prisoner, and a petition signed by Loyalists pledging their allegiance to the King—are re-created in uniquely designed envelopes throughout the book and secured with the congressional seal.

Both a distinctive art book and a collectible archive, 1776: The Illustrated Edition combines a treasury of eighteenth-century paintings, sketches, documents, and maps with storytelling by our nation’s preeminent historian to tell the story of 1776 as never before.

Praise For 1776: The Illustrated Edition…

"This is a narrative tour de force, exhibiting all the hallmarks the author is known for: fascinating subject matter, expert research and detailed, graceful prose. ...Simply put, this is history writing at its best from one of its top practitioners." -- Publishers Weekly, Starred Review

David McCullough has twice received the Pulitzer Prize, for Truman and John Adams, and twice received the National Book Award, for The Path Between the Seas and Mornings on Horseback. His other acclaimed books include The Johnstown Flood, The Great Bridge, Brave Companions, 1776, The Greater Journey, and The Wright Brothers. He is the recipient of numerous honors and awards, including the Presidential Medal of Freedom, the nation’s highest civilian award. Visit DavidMcCullough.com.
or
Not Currently Available for Direct Purchase