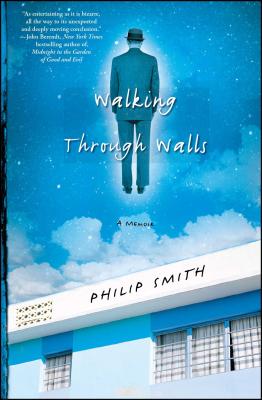 Running with Scissors meets Bewitched in this irresistible memoir, as Philip Smith describes growing up in 1960s Miami with his decorator father, who one day discovers he has the miraculous power to talk to the dead and heal the sick.

After a full day of creating beautiful interiors for the rich and famous, Lew Smith would come home, take off his tie, and get down to his real work as a psychic healer who miraculously cured thousands of people. For his son, Philip, watching his father transform himself, at a moment's notice, from gracious society decorator into a healer with supernatural powers was a bit like living with Clark Kent and Superman.

Walking Through Walls is Philip Smith's astonishing memoir of growing up in a household where séances, talking spirits, and exorcisms were daily occurrences, and inexplicable psychic healings resulted in visitors suddenly discarding their crutches and wheelchairs or being cured of fatal diseases.

While there are benefits to having a miracle man in the house, Philip soon discovers the downside of living with a father who psychically knows everything he is doing. Surrounded by invisible spirits who tend to behave like nagging relatives, Philip looks for ways to escape his mystical home life -- including forays into sex, surfing, and even Scientology.

By turns hilarious and profound, Walking Through Walls recounts Philip Smith's often bizarre but always magical coming of age in a household that felt like a cross between Lourdes and the set of Rosemary's Baby, and shows how he managed to map out his own identity in the shadow of a father who, truly, loomed larger than life itself.

Philip Smith is the former managing editor of GQ and an artist whose works are in the permanent collections of the Whitney Museum, the Dallas Museum of Art, and the Detroit Institute of Arts, among many others. He lives in Miami. Visit him online at www.WalkingThroughWallsTheBook.com.

Praise For Walking Through Walls: A Memoir…

"Philip Smith's compellingly readable memoir of his father -- a psychic, exorcist, hands-on-healer, and...decorator! -- is as entertaining as it is bizarre, all the way to its unexpected and deeply moving conclusion." -- John Berendt, author of Midnight in the Garden of Good and Evil and The City of Falling Angels

"At long last, a subject worthy of a memoir. Philip Smith recounts the story of his father, a visionary, a psychic healer, and a saint, with matter-of-fact grace, without ever denying how difficult it was to be the child of a man with unlimited supernatural gifts. Lew Smith was a man we are unlikely to ever see the likes of again, one of the few fathers in literature whose death I mourned as if I'd known him. I wish I had known him; he was a miracle. Every page of Walking Through Walls reminded me of how vast the universe, and how meager the dreams of our philosophies." -- Haven Kimmel, author of Iodine and A Girl Named Zippy

"A startling story, beautifully told. If you believe that science can explain everything, this book might change your mind. Walking Through Walls is a window into a fascinating world through the sensitive eyes of an observant son." -- Delia Ephron, author of Hanging Up

"Walking Through Walls is a funny and poignant memoir about growing up in a family as strange and mysterious as the Bermuda Triangle -- Dad is a psychic healer with a day job interior decorating for dictators, the dead speak, and adolescence is an altered state of grace." -- Dirk Wittenborn, author of Pharmakon and Fierce People
or
Not Currently Available for Direct Purchase
Copyright © 2020 American Booksellers Association