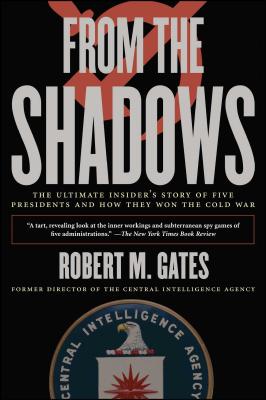 As the only person to rise from entry-level analyst to Director of the CIA and to serve on the White House staffs of four Presidents, Robert Gates is uniquely qualified to tell the unprecedented inside story of the Cold War. Drawing on his access to classified information and top-level involvement in policy decisions, Gates lays bare the hidden wars and operations the United States waged against communism worldwide. Ever certain that the fifty-year struggle with the Soviet Union was indeed a war, Gates makes candid appraisals of Presidents, key officials, and policies of the period. Among his disclosures are: how Carter laid the foundations for Reagan's covert wars against the Soviets; CIA predictions of a conservative coup against Gorbachev and the collapse of the Soviet Union; CIA and KGB "black operations" against each other; the secret relationship between Pope John Paul II and the Soviets; and three secret CIA-KGB summits.

From the Shadows is a classic memoir on the career of a CIA officer at the center of power during a time when the threat of global annihilation informed America's every move.