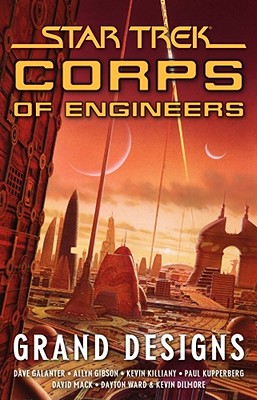 These are the voyages of the U.S.S. da Vinci. Their mission: to solve the problems of the galaxy, one disaster at a time. Starfleet veteran Captain David Gold, along with his crack Starfleet Corps of Engineers team lead by former Starship Enterprise ™ engineer Commander Sonya Gomez, travel throughout the Federation and beyond to fix the unfixable, repair the irreparable, and solve the unsolvable.

Whether it's an artificial planetary ring that was damaged during the Dominion War, an out-of-control generation ship, a weapons inspection gone horribly wrong, shutting down a crashed probe, solving a centuries-old medical mystery, or clearing a sargasso sea of derelict ships, the S.C.E. is on the case!

But the problems they face aren't just technical; Tev must confront the demons of his past, Lense must confront the demons of her present, Gold faces a crisis of leadership on his own ship, and Gomez must lead an away team into the middle of a brutal ground war. Plus the da Vinci crew must find a way to work with their Klingon counterparts in a deadly rescue mission.

Keith R.A. DeCandido was born and raised in New York City to a family of librarians. He has written over two dozen novels, as well as short stories, nonfiction, eBooks, and comic books, most of them in various media universes, among them Star Trek, World of Warcraft, Starcraft, Marvel Comics, Buffy the Vampire Slayer, Serenity, Resident Evil, Gene Roddenberry’s Andromeda, Farscape, Xena, and Doctor Who. His original novel Dragon Precinct was published in 2004, and he's also edited several anthologies, among them the award-nominated Imaginings and two Star Trek anthologies. Keith is also a musician, having played percussion for the bands Don't Quit Your Day Job Players, Boogie Knights, and Randy Bandits, as well as several solo acts. In what he laughingly calls his spare time, Keith follows the New York Yankees and practices kenshikai karate. He still lives in New York City with his girlfriend and two insane cats.

Paul Kupperberg is the writer of hundreds of books, stories, comic books, and newspaper comic strips. He has written for many comic book characters including Superman, Superboy, Supergirl, Vigilante, Power Girl, Aquaman, Green Lantern, Doom Patrol, Captain America, Conan, Captain Action, Archie, The Simpsons, Johnny Bravo, Scooby Doo, and dozens of others. In former lives, Paul has also been an editor for DC Comics, executive editor of Weekly World News and senior editor of WWE Kids Magazine. He lives in Connecticut with his son, Max.
Loading...
or
Not Currently Available for Direct Purchase