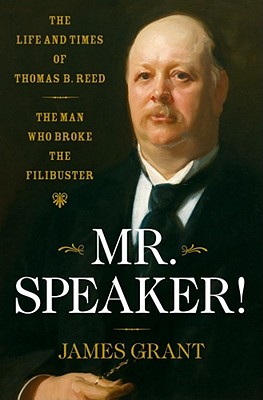 The Life and Times of Thomas B. Reed the Man Who Broke the Filibuster

James Grant's enthralling biography of Thomas B. Reed, Speaker of the House during one of the most turbulent times in American history--the Gilded Age, the decades before the ascension of reformer President Theodore Roosevelt--brings to life one of the brightest, wittiest, and most consequential political stars in our history. The last decades of the nineteenth century were a volatile era of rampantly corrupt politics. It was a time of both stupendous growth and financial panic, of land bubbles and passionate and sometimes violent populist protests. Votes were openly bought and sold in a Congress paralyzed by the abuse of the House filibuster by members who refused to respond to roll call even when present, depriving the body of a quorum. Reed put an end to this stalemate, empowered the Republicans, and changed the House of Representatives for all time. The Speaker's beliefs in majority rule were put to the test in 1898, when the sinking of the U.S.S. Maine in Havana Harbor set up a popular clamor for war against Spain. Reed resigned from Congress in protest. A larger-than-life character, Reed checks every box of the ideal biographical subject. He is an important and significant figure. He changed forever the way the House of Representatives does its business. He was funny and irreverent. He is, in short, great company. "What I most admire about you, Theodore," Reed once remarked to his earnest young prot g , Teddy Roosevelt, "is your original discovery of the Ten Commandments." After he resigned his seat, Reed practiced law in New York. He was successful. He also found a soul mate in the legendary Mark Twain. They admired one another's mordant wit. Grant's lively and erudite narrative of this tumultuous era--the raucous late nineteenth and early twentieth centuries--is a gripping portrait of a United States poised to burst its bounds and of the men who were defining it.

Praise For Mr. Speaker!: The Life and Times of Thomas B. Reed the Man Who Broke the Filibuster…

“The most influential speaker of the House most people have never heard of . . . Reed makes for good copy . . . Grant has managed to rescue Reed from oblivion and to capture the raucous political atmosphere in which Reed did battle.”

“Rollicking…. [a] droll, urbane narrative…. A lively, opinionated, and timely study of irresponsible politics grappling with a dire economy…. Grant's Reed encapsulates a political era that is the mirror image of our own.”

“It is good to have this excellent biography of Thomas Reed, a vastly underappreciated major figure in American political history. But it is especially worthwhile reading about him right now, because his era has so many similarities – maybe too many – with our own tumultuous and dysfunctional times.”

“A winning new biography. . . . After his death, oblivion overtook Reed quite quickly. Grant has helped restore him to his rightful place among the giants of the House.”

“Astute. . . . Grant is excellent in explaining how Reed could be a man of principle but also a practical politician.”