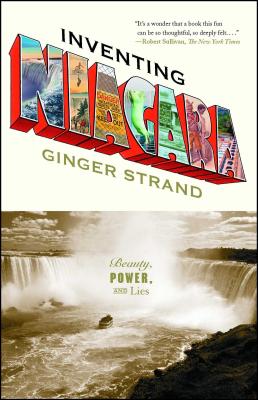 Americans call Niagara Falls a natural wonder, but the Falls aren't very natural anymore. In fact, they are a study in artifice. Water diverted, riverbed reshaped, brink stabilized and landscape redesigned, the Falls are more a monument to man's meddling than to nature's strength. Held up as an example of something real, they are hemmed in with fakery -- waxworks, haunted houses, IMAX films and ersatz Indian tales. A symbol of American manifest destiny, they are shared politely with Canada. Emblem of nature's power, they are completely human-controlled. Archetype of natural beauty, they belie an ugly environmental legacy still bubbling up from below. On every level, Niagara Falls is a monument to how America falsifies nature, reshaping its contours and redirecting its force while claiming to submit to its will. Combining history, reportage and personal narrative, Inventing Niagara traces Niagara's journey from sublime icon to engineering marvel to camp spectacle. Along the way, Ginger Strand uncovers the hidden history of America's waterfall: the Mohawk chief who wrested the Falls from his adopted tribe, the revered town father who secretly assisted slave catchers, the wartime workers who unknowingly helped build the Bomb and the building contractor who bought and sold a pharaoh. With an uncanny ability to zero in on the buried truth, Strand introduces us to underwater dams, freaks of nature, mythical maidens and 280,000 radioactive mice buried at Niagara. From LaSalle to Lincoln to Los Alamos, Mohawks to Marilyn, Niagara's story is America's story, a tale of dreams founded on the mastery of nature. At a time of increasing environmental crisis, Inventing Niagara shows us how understanding the cultural history of nature might help us rethink our place in it today.

"Niagara Falls is where America discovered the sublime. And Ginger Strand has discovered everything that happened since. If you want to understand our relationship with the natural world, you better read this book." -- Bill McKibben, author of The Bill McKibben Reader

"Here we have two captivating stories -- one about America's most famous waterworks, and the other about how a self-proclaimed 'hydrogeek' schooled herself in the myths and meaning of the great falls. Displaying wit and verve on a scale worthy of her subject, Ginger Strand shows that Niagara has been harnessed, perhaps to a greater degree than any other of our natural wonders, to human purposes." -- Scott Russell Sanders, author of A Private History of Awe

"A brilliantly entertaining history of America's original natural wonder and its heedless boosters and failed visionaries." -- Mike Davis, author of City of Quartz and Planet of Slums

"As engaging as it is insightful, Inventing Niagara is a careful and caring study of how myth and machine have covered over a great natural place. Peeling back the myths and looking behind the machines, as she brilliantly does, Strand reveals who we have been and who we need to become." -- Curtis White, author of The Spirit of Disobedience and The Middle Mind

"This is a deep and exhilarating book. Its material could have been played for irony, but Strand chose profundity instead, burrowing down through self-conscious layers of artifice until she arrives at a place both strange and vital." -- David Gessner, author of Soaring with Fidel