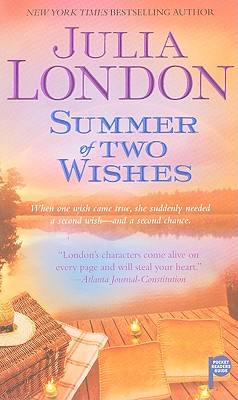 Macy Clark receives the second worst shock of her life when a military official delivers the news that her husband Finn Lockhart was not killed in a suicide bombing attack in Afghanistan—he is actually on his way back to the United States after being held prisoner for eighteen months. Finn was the love of Macy’s life and she was heartbroken when she received the news of his death.

But when charming ranch owner and real estate developer Wyatt Clark started calling on her, pursuing her with the relentless attention he brought to all his business deals, Macy was able to rejoin the living. She started seeing friends again, picked up her work at a dog rescue organization, decorated a big new house, and married Wyatt in a country club wedding. Suddenly, she has two husbands, two men who are determined to call her his wife. And now she learns she’s pregnant. But who is the baby’s father?

In Summer of Two Wishes, Julia London has crafted a compelling story that blends family drama with a heartfelt, sexy, and satisfying love story, guaranteed to delight her fans.

Praise For Summer of Two Wishes…

"London's characters come alive on every page and will steal your heart." -- Atlanta Journal-Constitution

Julia London is a New York Times and USA TODAY bestselling author of more than forty romantic fiction novels. She is the recipient of the RT Book Reviews Award for Best Historical Romance and a six-time finalist for the prestigious RITA award for excellence in romantic fiction. She lives in Austin, Texas.
Loading...
or
Not Currently Available for Direct Purchase