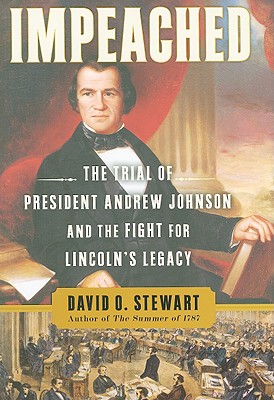 By the author of The Summer of 1787, the bestselling and highly acclaimed account of the writing of the constitution, a dramatic re-creation of the impeachment trial of Andrew Johnson, which became the central battle of the struggle over how to reunite a nation after four years of war.

Stewart traces the impeachment saga to the social and political revolutions that rocked the South with the end of slavery and the Civil War. As president after Lincoln’s assassination, Johnson, a Tennessee Democrat, not only failed to heal the nation’s wounds but rubbed them raw, ignoring widespread violence against the freed slaves and encouraging former rebels to resume political control of the Southern states. His high-handed actions were opposed by the equally angry and aggressive Congress, led by rep. Thaddeus Stevens of Pennsylvania, an ardent foe of slavery who aimed to rebuild American society on principles of equality and fairness.

The titanic collision between Congress and the president was diverted into a legalistic dispute over whether Johnson could fire his own Secretary of War. Inept lawyering by Johnson’s prosecutors, combined with political deals, saved Johnson by a single vote in the Senate.

Impeached challenges the traditional version of this pivotal moment in American history, which portrays Johnson as pursuing Lincoln’s legacy by showing leniency to the former rebels. Impeached shows the compelling reasons to remove this unfortunate president from office, reveals the corrupt bargains that saved Johnson’s job, and credits Johnson’s prosecutors with seeking to remake the nation to accord with the ideals that Lincoln championed and that the Civil War was fought for.