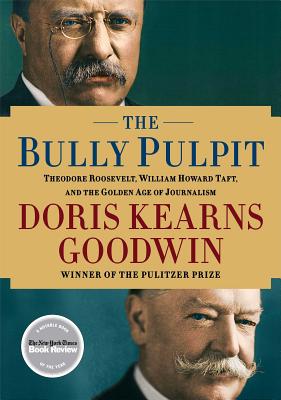 Pulitzer Prize–winning author and presidential historian Doris Kearns Goodwin’s dynamic history of Theodore Roosevelt, William H. Taft and the first decade of the Progressive era, that tumultuous time when the nation was coming unseamed and reform was in the air.

Winner of the Carnegie Medal.

These unnervingly familiar headlines serve as the backdrop for Doris Kearns Goodwin’s highly anticipated The Bully Pulpit—a dynamic history of the first decade of the Progressive era, that tumultuous time when the nation was coming unseamed and reform was in the air.

The Bully Pulpit is also the story of the muckraking press, which arouses the spirit of reform that helps Roosevelt push the government to shed its laissez-faire attitude toward robber barons, corrupt politicians, and corporate exploiters of our natural resources. The muckrakers are portrayed through the greatest group of journalists ever assembled at one magazine—Ida Tarbell, Ray Stannard Baker, Lincoln Steffens, and William Allen White—teamed under the mercurial genius of publisher S. S. McClure.

“Goodwin’s evocative examination of the Progressive world is smart and engaging. . . . She presents a highly readable and detailed portrait of an era. The Bully Pulpit brings the early 20th century to life and firmly establishes the crucial importance of the press to Progressive politics.”
— The Washington Post

Doris Kearns Goodwin’s interest in leadership began more than half a century ago as a professor at Harvard. Her experiences working for Lyndon B. Johnson in the White House and later assisting him on his memoirs led to her bestselling Lyndon Johnson and the American Dream. She followed up with the Pulitzer Prize–winning No Ordinary Time: Franklin & Eleanor Roosevelt: The Home Front in World War II. She earned the Lincoln Prize for the runaway bestseller Team of Rivals, the basis for Steven Spielberg’s Academy Award–winning film Lincoln, and the Carnegie Medal for The Bully Pulpit, the New York Times bestselling chronicle of the friendship between Theodore Roosevelt and William Howard Taft. She lives in Concord, Massachusetts. Visit her at DorisKearnsGoodwin.com or @DorisKGoodwin.
Loading...
or support indie stores by buying on
(This book is on backorder)