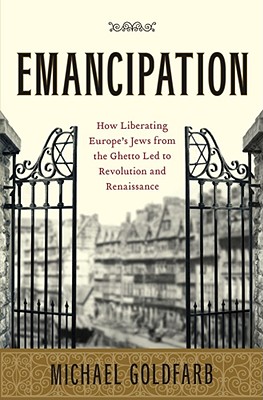 For almost 500 years the Jews of Europe were kept apart, confined to ghettos or tiny villages in the countryside. Then, in one extraordinary moment in the French Revolution, the Jews of France were emancipated. Soon the ghetto gates were opened all over Europe. The era of Emancipation had begun. What happened next would change the course of history.

Emancipation tells the story of how this isolated minority emerged from the ghetto and against terrible odds very quickly established themselves as shapers of history, as writers, revolutionaries, social thinkers, and artists. Their struggle to create a place for themselves in Western European life led to revolutions and nothing less than a second renaissance in Western culture.

The book spans the era from the French Revolution to the beginning of the twentieth century. The story is told through the lives of the people who lived through this momentous change. Some are well-known: Marx, Freud, Mahler, Proust, and Einstein; many more have been forgotten. Michael Goldfarb brings them all to life.

This is an epic story, and Goldfarb tells it with the skill and eye for detail of a novelist. He brings the empathy and understanding that has marked his two decades as a reporter in public radio to making the characters come alive. It is a tale full of hope, struggle, triumph, and, waiting at the end, a great tragedy.

This is a book that will have meaning for anyone interested in the struggle of immigrants and minorities to succeed. We live in a world where vast numbers are on the move, where religions and races are grinding against each other in new combinations; Emancipation is a book of history for our time.

Praise For Emancipation: How Liberating Europe's Jews from the Ghetto Led to Revolution and Renaissance…

"This is a fascinating book that describes how the French Revolution and then Napoleon's military excursions throughout Europe brought about the liberation of Jews from the segregated ghettos that had constrained them for half a millennium. Ironically, the ghetto experience enabled the Jews to play a dramatic role in a changing European economy as the power of land ownership diminished and money and trade began to rule and was echoed by the American immigrant experience and the push for assimilation and identity. But hatred of the Jews led Theodor Herzl, among others, to conclude that only a Jewish state could provide for the security of the Jews. In today's environment, this is a must-read." -- MORT ZUCKERMAN

"The experience of the Jewish people has been so darkened by horror for them and shame for humanity that the brighter chapters and themes of their story are sometimes eclipsed. In this book, Michael Goldfarb offers a corrective that is brilliant, concise, and vigorously argued, while at the same time suffused with one of history's cruelest ironies: the Jews were beneficiaries of -- and contributors to -- the Age of Reason in the 18th and 19th centuries only to become the principal victims of genocidal madness in the 20th." -- STROBE TALBOTT, author of The Great Experiment

"In Emancipation, Michael Goldfarb offers a well-researched and beautifully written masterwork that reveals the liberating impact that the French Revolution and Napoleon's forces had on the Jews of Europe. Once the legal barriers that had confined them were torn down, ossified, isolated communities became laboratories of human creativity, brimming with knowledge and learning. No longer disconnected from the wider world, Jews were able to make extraordinary contributions in the realms of science, ideology, culture, philosophy, education, and more. In turn, the Jewish religion was itself transformed, creating new branches that quickly intertwined with mainstream societies and social movements. At a time when global xenophobia is too much with us, it is rewarding and even nourishing to read about how the closed doors of divisiveness can be opened wide, even when the key turns out to be held in unexpected hands." -- VARTAN GREGORIAN, President, Carnegie Corporation of New York

"One of those marvelous books that not only illuminates an important chain of historical events, but provides timeless -- and especially timely -- lessons for our own age." -- The Washington Times