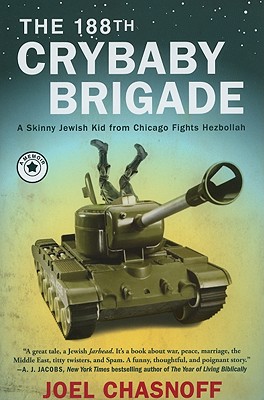 Look at me. Do you see me? Do you see me in my olive-green uniform, beret, and shiny black boots? Do you see the assault rifle slung across my chest? Finally I am the badass Israeli soldier at the side of the road, in sunglasses, forearms like bricks. And honestly -- have you ever seen anything quite like me?


Joel Chasnoff is twenty-four years old, an American, and the graduate of an Ivy League university. But when his career as a stand-up comic fails to get off the ground, Chasnoff decides it's time for a serious change of pace. Leaving behind his amenity-laden Brooklyn apartment for a plane ticket to Israel, Joel trades in the comforts of being a stereotypical American Jewish male for an Uzi, dog tags (with his name misspelled), and serious mental and physical abuse at the hands of the Israeli Army. The 188th Crybaby Brigade is a hilarious and poignant account of Chasnoff's year in the Israel Defense Forces -- a year that he volunteered for, and that he'll never get back. As a member of the 188th Armored Brigade, a unit trained on the Merkava tanks that make up the backbone of Israeli ground forces, Chasnoff finds himself caught in a twilight zone-like world of mandatory snack breaks, battalion sing-alongs, and eighteen-year-old Israeli mama's boys who feign injuries to get out of guard duty and claim diarrhea to avoid kitchen work. More time is spent arguing over how to roll a sleeve cuff than studying the mechanics of the Merkava tanks. The platoon sergeants are barely older than the soldiers and are younger than Chasnoff himself. By the time he's sent to Lebanon for a tour of duty against Hezbollah, Chasnoff knows everything about why snot dries out in the desert, yet has never been trained in firing the MAG. And all this while his relationship with his tough-as-nails Israeli girlfriend (herself a former drill sergeant) crumbles before his very eyes. The lone American in a platoon of eighteen-year-old Israelis, Chasnoff takes readers into the barracks; over, under, and through political fences; and face-to-face with the absurd reality of life in the Israeli Army. It is a brash and gritty depiction of combat, rife with ego clashes, breakdowns in morale, training mishaps that almost cost lives, and the barely containable sexual urges of a group of teenagers. What's more, it's an on-the-ground account of life in one of the most em-battled armies on earth -- an occupying force in a hostile land, surrounded by enemy governments and terrorists, reviled by much of the world. With equal parts irreverence and vulnerability, irony and intimacy, Chasnoff narrates a new kind of coming-of-age story -- one that teaches us, moves us, and makes us laugh.

Joel Chasnoff is a stand-up comedian and writer with stage and screen credits in eight countries. His writing has been featured in The Idiot's Guide to Jokes and The Big Book of Jewish Humor: 25th Anniversary Edition. On tour, he was the warm-up act for Jon Stewart and Lewis Black of The Daily Show. After graduating from the University of Pennsylvania, Chasnoff moved to Israel and volunteered for a combat unit of the Israeli Army. As a member of the 188th Armored Brigade, Chasnoff was voted Outstanding Soldier of the Company and deployed to Lebanon for a tour of duty against Hezbollah. The 188th Crybaby Brigade is Chasnoff's humorous memoir about his year in the Israeli military. A portion of all proceeds from sales of The 188th Crybaby Brigade is donated to Chasnoff's charitable foundation, Project Elijah.
Loading...
or
Not Currently Available for Direct Purchase