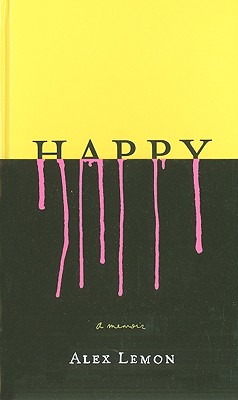 “This memoir of a man who had his first stroke at 19 is both harrowing and uplifting. As Alex Lemon battles physically, the true story is about the toughest fight anyone has, against ourselves. In the course of his struggle the author discovers the true meaning of love and delivers a visceral, wrenching experience to the reader.”
— Bill Cusumano, Nicola's Books, Ann Arbor, MI
View the List

His freshman year of college, Alex Lemon was supposed to be the star catcher on the Macalester College baseball team. He was the boy getting every girl, the hard-partying kid who everyone called Happy, often without even knowing his real name. In the spring of 1997, he had his first stroke.

For two years Lemon coped with his deteriorating health by sinking deeper into alcohol and drug abuse. His charming and carefree exterior masked his self-destructive and sometimes cruel behavior as he endured two more brain bleeds and a crippling depression. After undergoing brain surgery, he is nursed back to health by his free-spirited artist mother, who once again teaches him to stand on his own.

Alive with unexpected humor and sensuality, Happy is a hypnotic self-portrait of a young man confronting the wreckage of his own body; it is also the deeply moving story of a mother's redemptive and healing powers. Alex Lemon's Technicolor sentences pop and sing as he writes about survival -- of the body and of the human spirit.


Praise For Happy: A Memoir…

“One of our time’s most compelling memoirs…..An electrifying portrait of a body in crisis.” –Esquire

"Alex Lemon takes his reader inside the terror and strangeness of illness -- and gives us, along the way, a loving portrait of a devoted, wonderfully nutty mother. Lemon is a brave, headlong writer, and he captures the life of the body with vivid and memorable intensity." -- Mark Doty, author of Dog Years and Fire to Fire

“This one is something special….This is the story of a boy and his mother, but one whose tenderness sneaks up on you while you're distracted by all the blood and booze and hollering. The two of them can talk about nearly anything, but don't always have to. What Lemon and his mom have is that rarest of things in a trauma memoir, a parent-child relationship that is more than merely "functional." It's funkily, goofily, supremely life-affirming. Make that lifesaving.”—Laura Miller, Salon.com

"The pyrotechnic prose of Alex Lemon's memoir creates an electrifying portrait of a body in crisis, and the way the soul is inexorably, reluctantly, dragged along.... If ever a book was written in blood, it is this one." -- Nick Flynn, author of Another Bullshit Night in Suck City

“Dazzling….. An unnervingly intimate, relentlessly poetic recounting of debauchery, trauma and healing, Alex Lemon’s memoir is cut from the same cloth as David Carr’s The Night of the Gun or James Frey’s discredited A Million Little Pieces. But whereas those autobiographies reveled in the seamy details accompanying the wild life, Happy is far more concerned with the party’s aftermath…..There are few modern works that so elegantly capture a mind and, by extension, a life on the verge of disintegration.” –Fort Worth Star-Telegram

"Happy unfurls like gauze, revealing not a wound, but a series of intricate and beautiful scars.ÊAlex reminds us that though we can't make it through this life unscathed, we can make it through transformed." -- Robin Romm, author of The Mercy Papers and The Mother Garden

“Alex Lemon makes Happy harrowing and upbeat, writing with a poet's touch about the illness that overtook his jock life….Nonfiction writers and poets have a secret alliance -- working toward defining a truth instead of making it up. So when we get a twofer of a poet writing memoir, the results trend toward glinting precision.” -- The Cleveland Plain Dealer

"A page-turner on par with the best thrillers...Lemon's exquisite prose blasts us out of our own time, heart, brain, and body into his, making an acute empathy possible. Read this and weep, laugh, weep." -- Library Journal, Editors' Pick

“Happy is graphically raw and in-your-face; Lemon's dexterity with words forces the reader into gritty latitudes no one would visit voluntarily, and the level of detail will cause some readers to squirm. But Happy is an honest voyage into Lemon's keen mind, remarkable spirit and loving heart, and it shouldn't be missed.”– Minneapolis Star Tribune